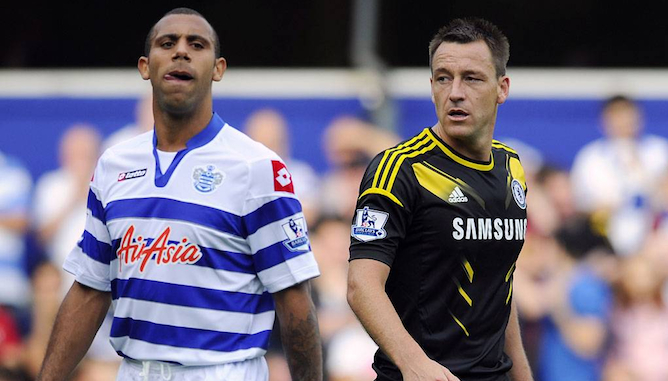 John Terry’s dad got found guilty of racism last night and it hasn’t taken long for people to star trolling him with Anton Ferdinand coming up with the best one by far.

If you know anything about football – and even if you probably don’t – then you probably know that John Terry is a piece of work. Shagging his best mate’s wife (amongst others), being found guilty of racism, celebrating in his kit when he hasn’t even played in the final are all actions testament to this, as his is general demeanour of just being an all round prick.

So it’s no real surprise to find out that his father is an asshole too. It must run in the genes or be how he was raised or something. It makes sense. So yeah, somehow it was kept real quiet until last night that John Terry’s dad – the amusingly named Ted Terry – was accused of a racially aggravated attack in a street fight that occurred way back on March 22nd. There aren’t many other details about this attack yet other than that two other men – Tudor Musteata, 47, and Stephen Niland, 36 – have also been charged and that all three men have also been charged with racially aggravated fear of violence. I don’t know what that means but it sounds serious.

This isn’t really that funny – although it is funny that a guy who I guess must be at least 50 is getting into street fights, despite the fact he’s loaded and has a really famous son – as there is nothing cool about racism or beating people up in the street – no matter what they look like or believe. However, it is quite funny that lots of people can all say stupid phrases on their Twitter accounts like ‘looks like the apple doesn’t fall far from the tree #terry’ or ‘Guess it runs in the family #terryisaracist’ etc etc and think they’re really witty and awesome and that nobody else is doing exactly the same thing as them.

This is where it gets really good though. Anton Ferdinand surprisingly – I mean come on he doesn’t look like he would be that smart (that’s not racist by the way, please don’t hate me) – came up with one of the most inventive ways of trolling anyone ever that is actually really funny. It also has the bonus effect of probably leading to him avoiding a telling off and fine from the FA (which almost always happens when any footballer does anything on Twitter) because it’s so subtle he can probably actually get away with saying it’s completely unrelated to the Terry racism incident.

Of course, anyone with a brain knows differently but that’s the beauty of it. I never thought I’d say this, but nice one Anton Ferdinand. Check out his tweet below:

Don't u just love it when ur music is on shuffle #nowplaying pic.twitter.com/cr3lrkCYTL