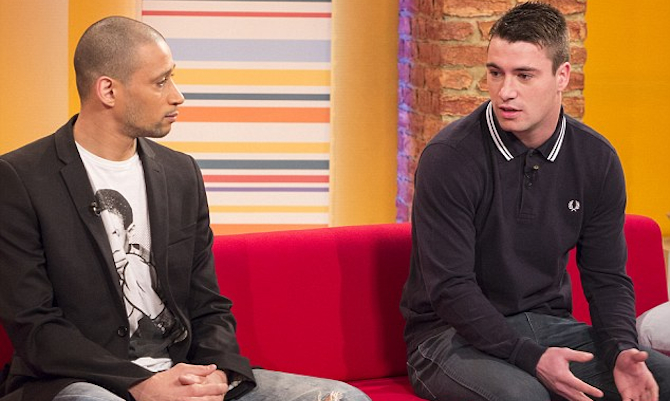 The whole world stood still and watched Curtis Woodhouse live tweet his attempts to track down a loser who had been trolling him on twitter, only for his quest to be unsuccessful. Well, some TV show decided to bring them face to face a couple of days later.

So, on Monday I posted up a story about former footballer turned boxer Curtis Woodhouse tracking down a Twitter troll and live tweeting his attempts to find him and have a word with him/spark his lights out and it was pretty much the most popular post we have ever posted on Sick Chirpse which was pretty awesome. Even The Guardian’s tech editor Charles Arthur linked back to it – it was that good. Wow.

So yeah, I’m gonna assume that you all read it because it was HUGE, but hardly anyone seems to have picked up the fallout from it that occurred today on ITV’s Daybreak. Of course, Daybreak is well known for being a current affairs programme and once featuring a bunch of X Factor losers on a rollover gurning their tits off, so it seems likely that they would be the ones who would follow up on a story that was published on Sick Chirpse.

And that’s exactly what happened as Daybreak managed to do what Curtis Woodhouse couldn’t and track down this twitter troll and bring them face to face on LIVE television. WOW – this is what everyone wanted to see and it’s finally happening. Except it’s probably the most disappointing event in the history of forever.

Basically, it’s a few days later and both men have calmed down sufficiently and they don’t even argue or shout at each other. The troll – some guy called James O’Brien who looks like he probably works in a call centre of something – is a complete pussy and says he’s completely embarrassed by his behaviour and that he’s let himself down blah blah blah blah blah. Instead of knocking him out or telling him off though all Curtis Woodhouse does is accept his apology – how lame is that?

â˜› More Reasons To Apologise: This Is The Worst Date Ever

Granted he has completely embarrassed him and made him look like a real idiot by making him come on a TV show and act like a complete pussy, but I was hoping for a bit more action or drama, not a truth and reconciliatory committee. You can check out the video below but it really is a bit meh compared to the stuff that was going on on Monday.

It’s cool that this kind of stuff is happening though – maybe it will lead to the return of a Get Your Own Back style show with celebrities getting their own back on Twitter trolls? We can only hope that Dave Benson Philips would get involved to present and we don’t end up with some idiot like Vernon Kaye.