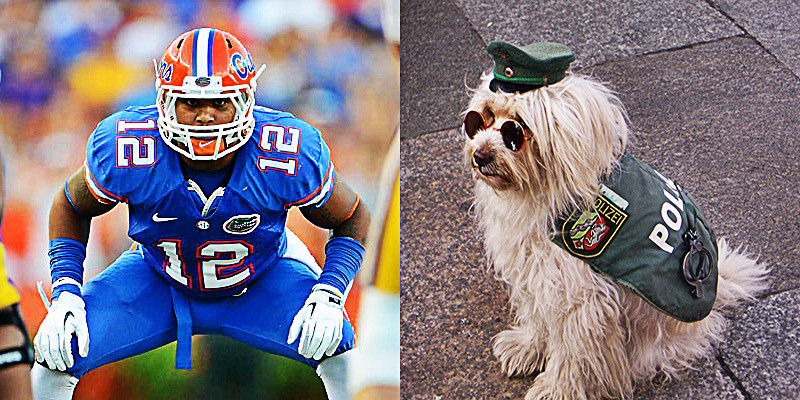 American Football is well known for being a macho bloodbath of egotistical mayhem. Therefore, it should come as no surprise to anybody that American Football players can act like a bunch of wild fucking animals on the pitch. After all, the sport involves a hell of a lot of tackling and battering your fellow man, a dash of homoerotic groping in preparation for the after match shower, and the occasional punch-up when shit really starts getting deep. 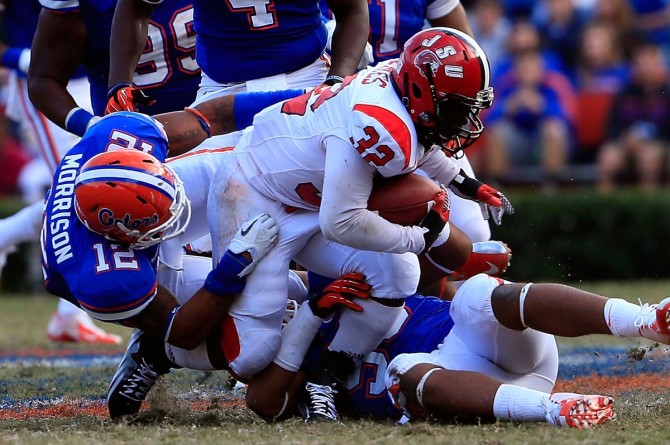 Anyway, you’d expect most American Football players to bottle up those animalistic tendencies throughout their daily lives, carefully storing each feral desire to be unleashed at the next big game. However, every now and again the urge to act like an untamed beast must be too overwhelming for some of them and a public outburst of pure, unadulterated, primitive madness is what’s needed to restore inner peace.

Well, that was the case this week for Florida Gators player Antonio Morrison. To fulfil his undomesticated urges, Morrison decided to abandon his mother tongue and turn to talking canine by walking up to the window of a police car and barking at a fucking police dog. I’m not sure if he was dissatisfied with general communication and the human language that day, or wasn’t getting enough of a fix barking orders on the football pitch, but that’s what he did.

Of course, barking at police dogs is an unspeakable crime that can lead to truly horrific outcomes, you know, like the dog barking back. That’s exactly what Bear the police dog did, and Morrison’s quick animalistic fix led to his arrest for “interfering with a police canine” (do the American Police really have nothing better to do?). What’s even funnier is that he resisted arrest and came up with an unbelievably genius excuse for his behaviour – by saying “the dog barked at me first.” Smart cookie that one.

Check Out Florida’s Dark Side: Florida — The Dark Side to the Sunshine State

To make things even worse for Morrison, this was his second arrest in the space of five weeks. He was arrested back in June for more wild animal behaviour; that time for unleashing his fist on an unsuspecting bouncer, for which he was deferred prosecution as long as he stayed out of trouble for six months.  But, instead of doing that, he decided to lay down a second bout of terror barely a month later – by barking – I think it’s safe to say self control obviously isn’t his strongest trait.

Luckily for Antonio he managed to get away with his madness this time and he won’t be going to the slammer, even though the police officer who arrested him said “I’m telling you, you’re going to jail for interfering with my dog” (they really do have nothing better to do). He is, however, suspended from his team and will have to miss two games.

Nevertheless, the rest of us can take this as a valuable life lesson. If you ever have the urge to retreat to a simpler state of mind and bark uncontrollably during your day, make sure you choose your target dog wisely. Invest some time either taking a trip to the local kennels or waiting until you get a glimpse of your neighbours Labrador, because barking at police dogs is just plain dumb.

You can check out the ESPN report on his arrest here: