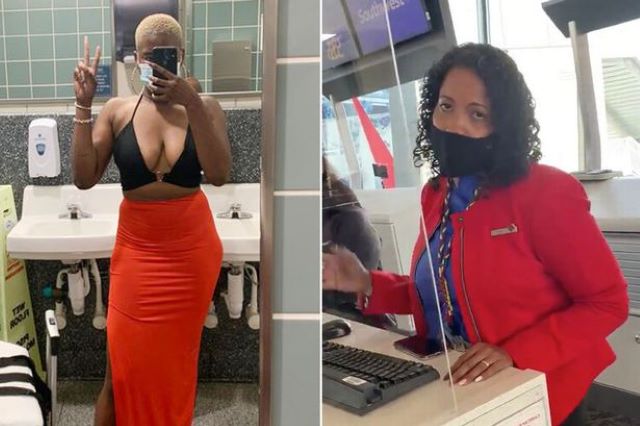 The pilot was smooth AF.

In a world where you’re lucky to go an entire flight without someone taking off their shoes or socks, you would think airlines would be a bit more relaxed when it comes to women showing a little bit of cleavage.

Not so in the case of Kayle Eubanks AKA Uzi Suzy (great name) who was booted off her Southwest Airlines flight this week:

Y’all I was KICKED OFF my @SouthwestAir flight because my boobs are “lewd, obscene and offensive.” I was told that passengers may look at me in my attire and be offended. The attire in question: https://t.co/tOAxZsFDU5 pic.twitter.com/S9W9gFXpg6

Especially in this crazy coronaworld, surely a lady should be allowed to have her tits on display so long as she’s wearing a mask (which Kayla is clearly doing)?

You can tell by how the gate attendant is combing through the rule book that she’s just looking for any excuse to ruin Kayla’s day:

This @SouthwestAir employee practically did cartwheels to ensure that I wouldn’t get on this plane y’all. I was held at the gate for 30 minutes because of my shirt. pic.twitter.com/gxnlNX4H6b

Even the pilot, who was smooth AF, knew it was nonsense:

The @SouthwestAir employee stopped looking for this policy and caught the Captain coming out of the bathroom and asked him to intervene. He literally comes out saying that they’re hating on me 🙃. pic.twitter.com/oJ4yqe9hLq

“They’re hating on you cos you’re looking good” – what a line. How is this legend working for a low-cost airline and not commanding the Royal Air Force?

He ended up lending Kayla his shirt so she could board the plane:

The CAPTAIN of the flight loaned me his shirt so that I could board (having been removed from the flight and the flight being delayed). I eventually took it off.. Only to be told that I would have to speak with a supervisor upon landing pic.twitter.com/sBLCHrRbRO

Unfortunately we can’t get a look at the whole shirt but I’m pretty confident it’s an awesome one. What I’m wondering now is whether the pilot will end up taking some heat for his approach? Seems to me he was just trying to deescalate the situation and obviously succeeded in doing so. His wife might not be too happy about it though when she sees the video going viral (notice the wedding ring).

In the end, Southwest Airlines reached out to apologise to Kayla and offered her a refund for her troubles. All’s well that ends well eh?

To watch passengers fight on a plane after a man refused to swap out his face shield for a mask, click HERE.