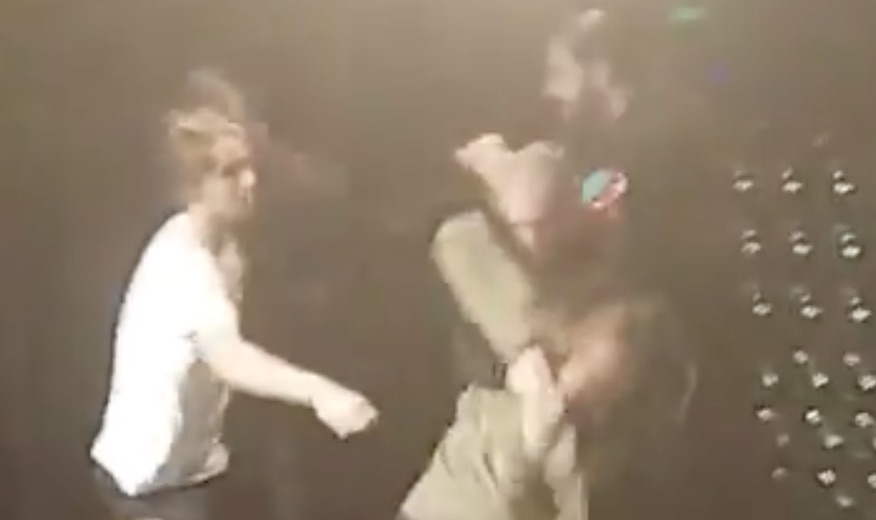 Neck Deep are one of the most successful UK punk bands in recent memory and are currently embarking on a sold out UK tour that includes a date at Brixton Academy – quite the achievement for band of that genre from this country – but despite the fact that their band is doing pretty well it doesn’t mean that life isn’t out to get them.

This was illustrated last night by an incident that went down during their set at Nottingham Rock City. There are a lot of different stories floating around about what went down, but here’s what I can make out from a bunch of people talking on Twitter and various forums – no official statement from the band or venue has been forthcoming yet.

Neck Deep were playing their second song when their bassist Fil saw that security were being pretty heavy handed with fans who were crowdsurfing. He started shouting at them and this led them to drag him off stage, which the other members of the band weren’t happy about, so dropped their instruments and went to confront security.

Whilst this was going on other security guards were still gripsing people who were crowdsurfing and this led to the band coming to full on blows with the guards, walking off stage and eventually returning to announce that the show had been cancelled. Absolute scenes.

There are also a couple of videos popping around that back up most of this version of events. Here’s the best ones that I can find, including the band fighting security, security beating up fans on stage, lead singer Ben Barlow announcing that the show is cancelled, and then Barlow again explaining to some fans what went down:

do love a good fight but not sure what actually happened here #neckdeep #rockcity pic.twitter.com/ibsSKXp1uQ

@NeckDeepUK this happened shorty after you left the stage. This is disgusting behaviour pic.twitter.com/tbn0Dr8r65

The security were out of order, hope you reschedule@NeckDeepUK#neckdeep#rockcitypic.twitter.com/wABUWMPCyA

What an absolute mess. I suppose I don’t know the full story behind what happened because the videos start after the band are attacking security, but you’ve got to think that there was some reason for that happening and the way that security are attacking the fans afterwards isn’t really going to endear anyone to them either.

Fair play to Neck Deep for trying to do something though – I’ve been to a lot of shows where security guards rough people up and act like this for no real reason other than because they can and the bands don’t do anything about it and it really needs to stop. Everyone is there to have fun and crowdsurfing and moshing is a part of that, and if security guards or fans are just there to try and hurt people then it just ruins it for everyone.

If any good comes of this incident it will be to raise awareness of that fact and encourage people on both sets of the divide to act more responsibly. We can but hope.

For more bands attacking people, check out this guy from The Story So Far dropkicking a fan off the stage. Nasty.