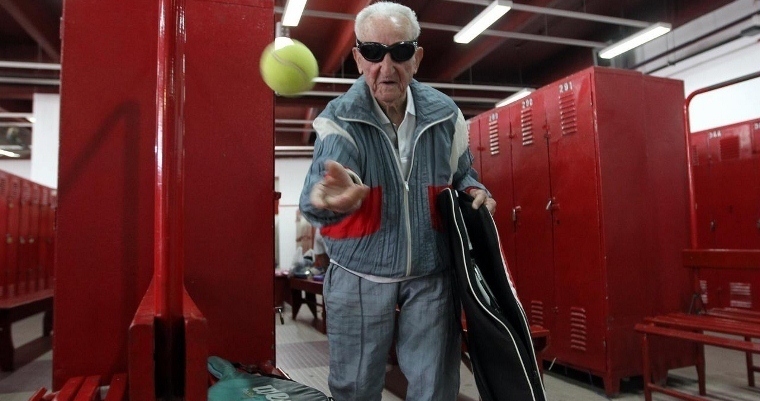 I’m not really into tennis at all usually, I think it’s pretty boring and I despise the posh people who are usually in the audience watching it. It’s not good for a hangover, either, I find. Gives you an even more sore head and strains your eyes watching the tiny yellow ball being pinged back and forth until one of the players drops a bad shot or just can’t be arsed to run around anymore. One thing tennis is good for, though, is that it’s top-class perving material when the women are on. Some of them are pretty fit. They’re probably the only reason I’ll waste my life watching it. But here’s something that sorta redeems tennis, it’s pretty cool.

Artin Elmayan is one epic dude. He’s 95 and is the world’s oldest ranked professional tennis player. I’ll probably be dead or gone crazy before I reach 95, so kudos has to be given to the bro. He trains 3 times a week in Buenos Aires, where he has to travel to from the suburbs where he lives, and it’s fair to say that he’d smash Andy ‘I Wasn’t Taught How To Smile’ Murray everywhere because we all know Murray is pretty shit and probably paid to win that title he just won. Bribing motherfucker. Elmayan’s got some cool vibes going off as well, he probably has no trouble with his chirpsing.

Check the video. I couldn’t understand what was being said, as I’m thick and only understand English.