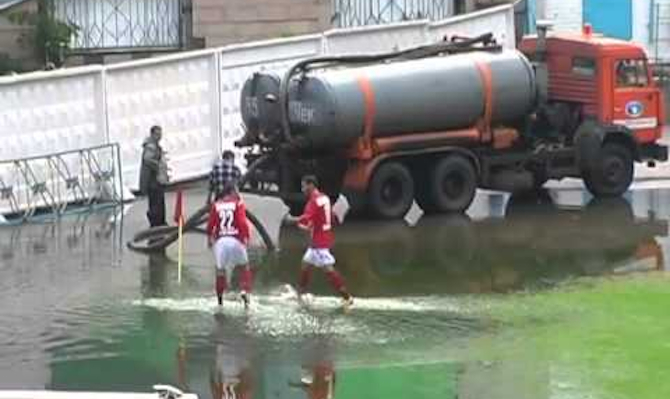 Corner kicks are an art form, but it’s hard to get them right when somebody decides to put the equivalent of a lake on the corner flag.

This is a couple of weeks old but it’s really funny so I couldn’t not feature it on Sick Chirpse when I came across it. Basically if you like football then you’ll know what a corner kick is, and you’ll probably agree with us that these are the most ridiculous conditions that a corner kick should ever be taken in. In fact, I’m kind of surprised the game was even allowed to be played to be honest considering how awful the pitch is but I’m glad that it was otherwise we wouldn’t have this hilarious video.

The match took place in Kazakhstan so it’s not that surprising that the conditions weren’t so hot. Unfortunately I don’t know the names of the teams involved or where it was or anything else about the video other than that it’s completely jokes, so my apologies about that.

To summarise it briefly whilst trying not to spoil it for everyone, it looks as if it has been raining for about a week prior to the match and that the corner of the pitch is the lowest point of it for some reason because it’s completely waterlogged. Like to the point that it looks almost like a lake or something. Ok, maybe not a lake but it’s a way bigger body of water than a puddle. Anyway, there’s no way you can take a corner kick in those conditions and so what ends up happening is really stupid and ultimately fairly pointless, kinda like them even deciding to play the match in the first place. The referee is a twat too.

See what happens below:

â˜› Watch These Videos Next:

German Idiot Jumps Into Frozen Pool Wearing His Speedos, Guess What Happens Next?