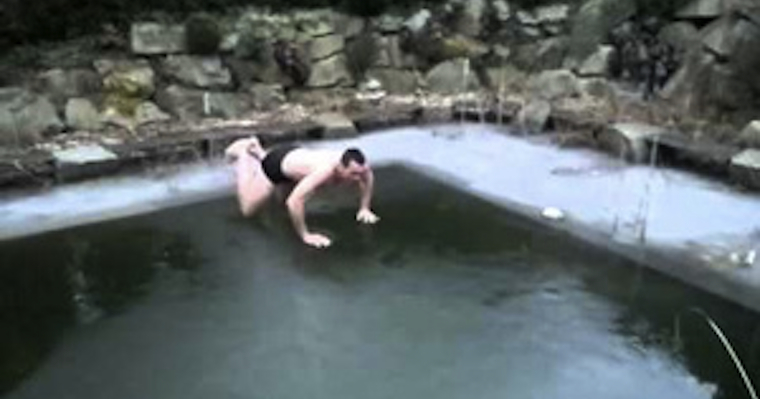 There’s only two ways this is gonna go, and they’re both gonna be pretty painful. It doesn’t make it any less hilarious when you see it though.

As the blurb says, there’s only really two ways this can go but it’s still pretty funny seeing what happens when this German idiot jumps into a frozen lake in the bomb position. It’s made even better by the fact that he’s wearing some kind of weird Speedo/hotpants combination and seems so brave and confident before he does it that whatever he’s gonna do is gonna be super awesome and not hurt at all.

I don’t know why he would think that though, if the water is frozen and he goes through the ice then it’s going to be really fvcking cold and freeze his butt off and if he doesn’t go through the ice then he’s just going to bounce off it which is really gonna hurt his head/ass/legs/whatever he goes through first on. It’s just a bad idea in general. Although it makes for a good video and you’ve got to assume that the dude is completely high or drunk from the way he can’t stop laughing for like a minute and a half after his trick goes wrong. Check it out below, did you guess correctly?

Would You Skate Half Naked On A Frozen Lake Then Dive In? How About After A Bottle Of Vodka? This Guy Does!