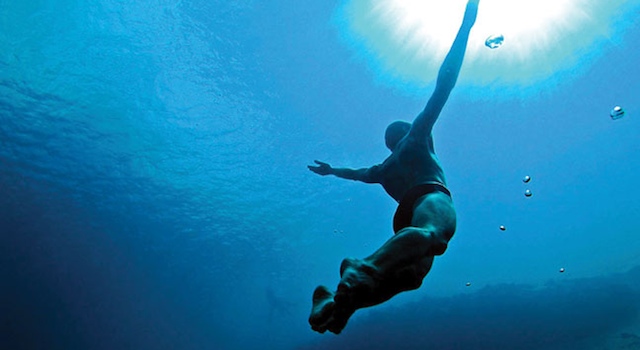 William Trubridge takes one breath and plunges 400 feet into the ocean and it looks incredible.

This is a pretty arty and atmospheric video all about freediver William Trubridge diving down into the depths of the ocean. Amazingly – I really don’t know how he can do this as I used to be able to swim two lengths underwater without breathing and it was fucking solid – he takes one breath and then just dives down into the ocean for about 400 feet. That’s a long way down dude.

All he does to prepare for this is float around in the water and try and get as relaxed as possible before he dives down. I’m not even sure why he does it other than the fact that it’s pretty cool. Trubridge actively swims down for about 30 foot and then he says that after that the water gets a hold of him and just pulls him down – which sounds pretty terrifying as I would be super scared about not being able to get back up in time – and he says that being so far underwater can lead to hallucinations. Again, this doesn’t sound too hot, although it would be pretty cool to be able to control that kind of stuff.

The video was filmed last year over by the Honduran island of Rotan and it’s shot in black and white. I might have preferred to see the big blue ocean for this video but shooting it in black and white makes it way more arty and avant garde – it is for a series called The Avant Garde diaries after all –  so I guess they know what they’re doing. It’s pretty haunting and also pretty incredible.