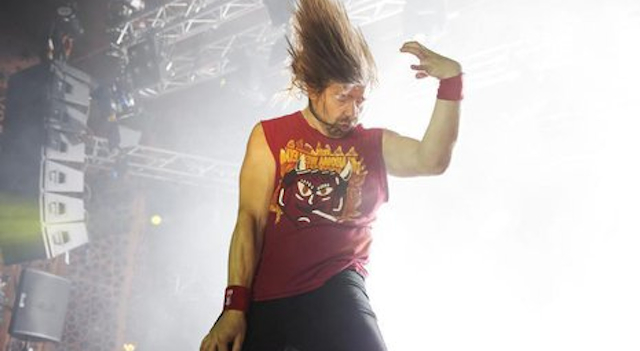 You might think you’re pretty good on air guitar when you’re busting your moves in the club to Papa Roach, but you ain’t got nothing on this guy.

Air guitar is a great concept and everyone thinks they’re awesome at it when you’ve had a few beers and you’re down at your local discotheque rocking out to Papa Roach or Rage Against The Machine or A7X or whatever the hell people listen to these days when they’re rocking out. Right there in that moment, you’re a guitar God and everyone in that dingy sweat filled club knows it.

Fast forward to the day after and you try and play an actual guitar and you’re completely fucking terrible. Or if you’re really unlucky some dumb girl you know has uploaded a video of everyone dancing in the club with a comment like ‘BEST NIGHT EVA <3’ and yeah, you got it, you’re completely fucking terrible at air guitar and look like a complete moron.

If you’re lucky your air guitar might be slightly decent, but it’s absolutely nothing on the guys who compete in air guitar championships and travel the world doing so. This year’s final was held in Finland somewhere (it’s probably held there every year, I’m not really sure) and people from all over the world (Japan, Russia, America) all travelled there to compete. I guess that’s how much being good at air guitar means to some people.

The crown this year went to some dude called Eric ‘Mean Melin’ Melin who travelled to the championships all the way from Kansas and to be fair to the guy he absolutely kills it. My only criticism would be perhaps that his hands are occasionally a bit too far apart to simulate playing an actual guitar but his general performance and moves more than make up for that. I was a bit disappointed he didn’t mime picking his guitar up and tuning it too because I love it when they do that, but again the whole performance is pretty mindblowing and full of great headbanging and guitar moves so I can’t really complain.