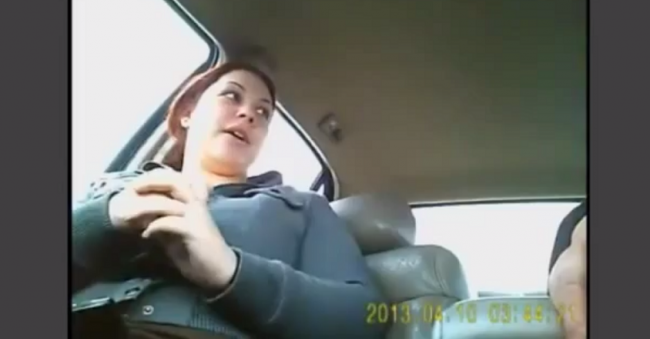 “If you could get him outside, that would be great… It would be messy in the house.”

Wow this is really crazy. This 21-year-old woman from Michigan called Julia Merfield tried to hire a hitman to kill her husband Jacob, 27, because divorce would involve breaking his heart and that would be too much hassle for her.

We’re able to see a chilling video of the conversations between her and the hitman, because the hitman she hired was actually an undercover cop and she’s now going to jail for ‘solicitation to commit murder’. Smooth.

Luckily for her her sentence will be capped at six years because Jacob “really doesn’t want her to go to jail.” Dude! She’s a psycho! You’d be dead right now if she wasn’t also an idiot!

â˜› It’s Not That Hard, Lady: Hiring Hitmen On The ‘Deep Web’

With this today and The Murder Trial on Channel 4 last night we’re having a bit of an overload of revealing footage into the mind of a murderer. This one is a lot more scary than the show last night, though, because when that dude murdered his wife (Was it his wife? I turned on half way through, and their Scottish accents were pretty strong…) it was circumstancial and not much rational thought went into it, and he seemed pretty remorseful afterwards. He might not have even been guilty.

But this one is a video of a woman who is completely calm and composed while discussing the best strategy of murdering the person she once loved. She’s a monster. She’s completely evil. And yet if you turned the sound off you’d think she was talking to a friend about what she had for dinner last night.

“If you could get him outside, that would be great… It would be messy in the house.”