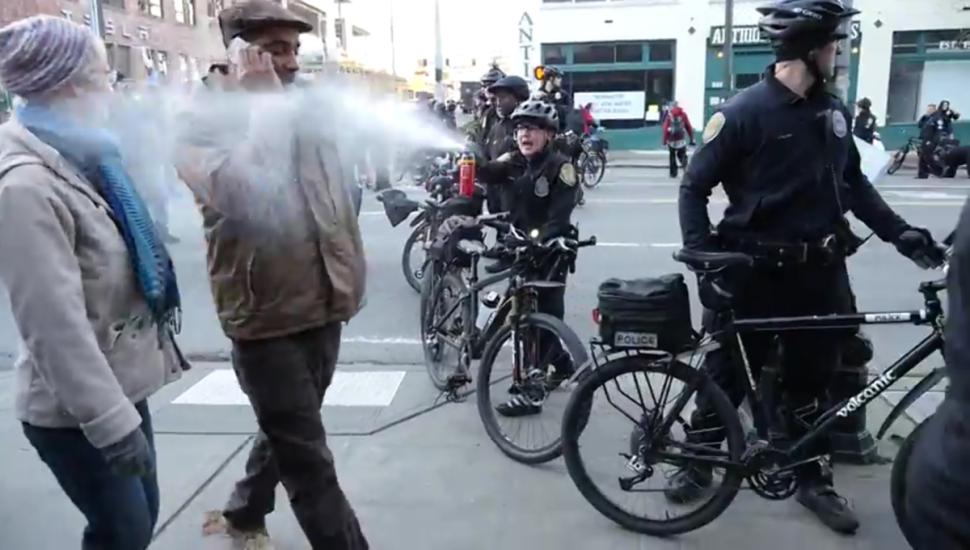 US cops aren’t making any friends at the moment.

The American police force are winning themselves an ever increasingly dire reputation. Like with any large group of people there are good ones and there are bad ones but it seems that the bad eggs of the police force are particularly loathsome. They’ve got a tough job to do but when they’re murdering black teenagers en masse, you know something has to change.

Seattle history teacher Jesse Hagopian was walking home from the peaceful protests on Martin Luther King day last week and was given a face full of pepper spray for literally no reason. The cops were trying to get the (pretty small and chilled) crowd to disperse and without further ado unloaded some grade-A pepper spray into them.

Now, pepper spray certainly isn’t as bad as getting shot in the knackers but it’s not something that you should unleash on the public for no good reason. The European Parliament Scientific and Technological Options Assessment published in 1998 “An Appraisal of Technologies of Political Control”. This is what it says about pepper spray:

The effects of pepper spray are far more severe, including temporary blindness which lasts from 15—30 minutes, a burning sensation of the skin which lasts from 45 to 60 minutes, upper body spasms which force a person to bend forward and uncontrollable coughing making it difficult to breathe or speak for between 3 to 15 minutes.

Hagopian was just ambling past the front line whilst speaking to his Mum on the phone. He certainly didn’t look like he was going to be causing much of a fuss. Take a look at this:

Whatever your thoughts on the US police department, something ain’t right. Even North Korea have stood up and shouted down the appalling state of affairs as far as US police are concerned, and when the DPRK has the moral high ground you know you’re screwed.

Fingers crossed there will be higher numbers of American policemen shooting off their own fingers than killing innocent kids in the future.