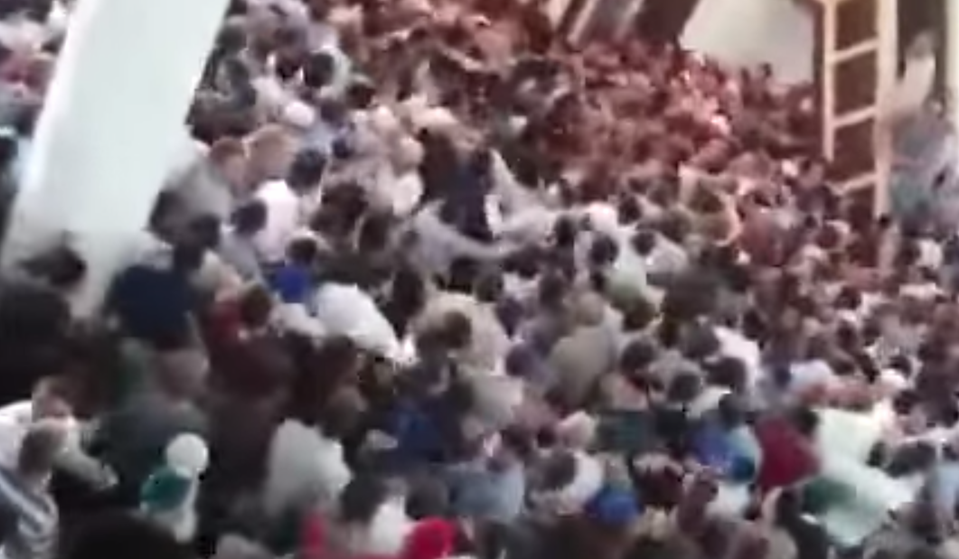 One of the major problems with religion (and there are quite a few) is that even those that follow their chosen holy scriptures to a ‘T’ can’t agree on what they should and shouldn’t be doing. The video below illustrates this point quite eloquently.

The footage comes from a mosque in the Ingushetia region of Russia and was shot last week during prayers. The footage starts off slow with people just praying and getting on with standard religious activities. But then, at the 2:00 mark one guy at the front gets up slowly and all of a sudden: ARMAGEDDON. The ruck goes from the front to the back in a split second.

It’s difficult to work out exactly what’s going on. The blurb on the YouTube video says:

So, that doesn’t clear much up for me. I followed a link to their site and found a video of one of the guys involved explaining what had gone on, but it was in Russian so that didn’t help either.

It sort of doesn’t matter really. It’s religious factions arguing about a made up story. Have a look. (Skip to 2:00 if you’re pushed for time):

Whilst you were watching that I did a bit of Googling to work out was going on. I found out that Chumakov, a Muslim cleric who is one of the guys in the video above, has become a big name in Islamic Russian circles; he condemns terrorist activity and preaches against young Russians going off to fight with ISIS and their cronies. But, because Chumakov also denounces politicians and their corrupt ways, he has become unpopular with politicians and other officials in Ingushetia. Thousands of DVDs of his talks have been confiscated by the police and his nephew has been threatened by security personnel.

It sounds complicated, and, as ever, it’s bound to end in blood shed. Chumakov lost a leg in a car bomb attack in Egypt in 2010 and despite trying to keep the peace, it seems that trouble follows him everywhere.

Well, there’s a glimpse into the heady political fray of Islamic Russia. I bet you didn’t expect to learn about that today, did you?