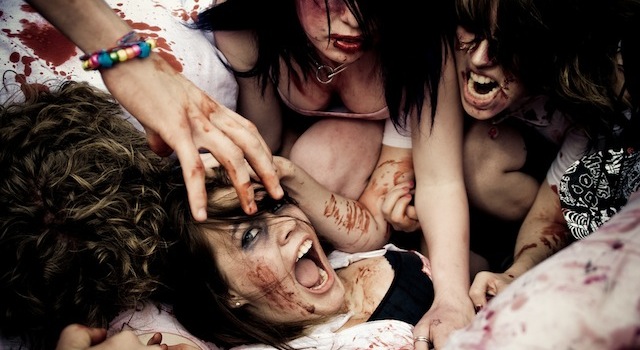 The University Of California has introduced a course focusing on the Zombie apocalypse.

The University of California has teamed up with AMC, the maker’s of hit TV series The Walking Dead, and Instructure, an educational technology company to offer a course titled ‘Society, Science, Survival: Lessons from AMC’s The Walking Dead’. The course commences on the 14th of October, and will run in tandem with the 4th series of the show.

I predict three reactions to this news. There will be the die hard zombie fan; “Awesome!” .The snobby intellectual; “….further cheapening the process of learning, populist trash, low brow…….”. And the average voter’s indifference to anything not directly in front of their face; “……………” But if you’ll allow the people creating this course to explain for themselves, they make a few good points, and show that Zombie survival films/series can teach lessons applicable to many areas of learning. Take some of the topic titles for example; Maslow’s hierarchy of needs as it applies to the post-apocalypse; The spread of infectious disease and population modeling; Managing stress in disaster situations; and Social identity, roles, and stereotyping “as shown through leaders like Rick and the Governor.” Apocalyptic themes are often used to study Anthropology, Sociology and Health Sciences, and this seems quite a logical step. Michael Dennin, a professor of physics and astronomy at UC Irvine who helped create the course has said;

“I really enjoy merging with the physics narrative arc with the pop culture I’m laying over it. It’s amazing how well a fictional physics example works to talk about real physics.”

Physics, for example, is applicable to shooting zombies in the head – or rather, explaining just how (and why) that works. “One of the things that’s particularly interesting – and a bit gory – is all the dynamics of the head shots. There’s just a ton of issues in there – conservation of momentum, what’s really going to go on – and when I researched it, it’s really fun for me,”

One of the biggest issues with teaching is that the material isn’t always applicable. By relating a few subjects to something as popular as The Walking Dead, it will make the subject material far more appealing. Brian Whitmer, the co-founder of Instructure, has said that he’s very interested in seeing the response to the course and whether coordinating around a current, popular topic will affect how engaged people are with the material. With Dennin adding;

“Teaching is all about connecting with students, and who they are, I’ve been teaching for my whole life and I always refer to books, movies, TV shows, whatever. I’m trying to connect with the students and what’s going on in their lives … One of the things we do as universities is research. We can look at this as research into education.”

Don’t think for a second that I’m getting completely swept away with all of this, the cynic in me is making me write the opinion that this is merely a publicity stunt by AMC for the next series of The Walking Dead – and Mr Cynical would be entirely correct, but that doesn’t mean that no good will come from this enterprise. The University of California seems to be looking at this as an opportunity to study how people learn, and whether similar techniques could be rolled out to more serious academic study. And let’s be realistic, if I had been taught physics in school by a teacher explaining to me how a bullet travels through a zombie’s head, I probably would have listened instead of trying to make a bong out of a watering can.