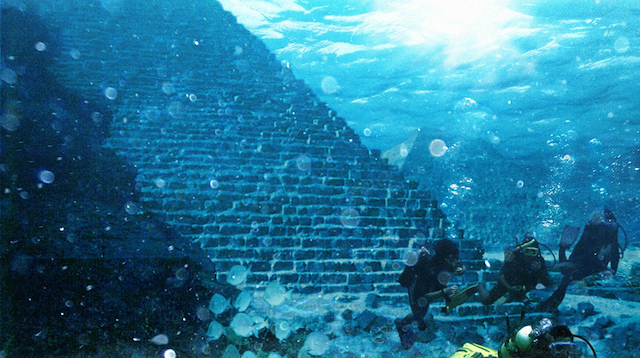 This could be one of the great new mysteries of the 21st century unless we go down there and figure out what the hell is going on right now.

Researchers (I’m not sure what they’re researching, the ocean?) have discovered what appears to be a giant underwater pyramid in the middle of the ocean near an area known as the Bank De Joao de Castro. This is in between the islands of Terceira and Sao Miguel, in the middle of the Azores archipelago which is situated in the middle of the North Atlantic Ocean. The pyramid is allegedly 60m high and has a base of 8000 square metres which makes it a pretty significant structure, even if it is sitting on the ocean floor.

It was discovered by sailor Diocleciano Silva via bathymetry readings (these are actually a really concept – it’s the study of the underwater depth of lake or ocean floors) and is currently being seriously investigated by these researchers with the assistance of the Portuguese Navy. Diocleciano Silva doesn’t believe that the pyramid can possible be of man made origin given where it is located but no definitive answers about it have been given yet. However, given the fact that the area has been underwater for 20,000 years since the last ice age, it definitely seems like something out of the ordinary is up with it.

You can watch a Portuguese news report with English subtitles on the discovery below. The English is really broken and doesn’t really make much sense but you can kind of get the gist of what they’re saying, and it seems like they’re relating it to what it says in the news report. I don’t know Portuguese so can’t understand if the subtitles are actually correct but it definitely seems like they’re discussing an underwater pyramid from the Portuguese words and images they’re using, so I don’t think it can possibly be a hoax unless it’s an incredibly well staged one? Opinions?

â˜› More Underwater Stuff: Underwater Unexplained Sounds – Could It Be The Kraken?

For what it’s worth, the Azores have always been a mysterious region. They are a chain of nine volcanic islands in three main groups that are roughly 930 miles west of Lisbon. They’re situated on the fault lines between the North American, Eurasian and African tectonic plates and were probably formed as a result of ‘land uprising’ (check out the post about the Pakistani earthquake creating an island to find out all about that) and were recolonized in 1941.

However, since then artifacts have been found on the islands that would suggest they were inhabited before a long long time ago, even before the time of Christ. As of today, nobody really knows how they got there or just what was going on on these islands before they were repopulated in 1941. Following the discovery of this alleged pyramid everyone is speculating that it could be – or is at least linked to – the legendary underwater city of Atlantis – but until we actually get a camera/person down there and check it out for real I for one am withholding my judgment. I’m eager to find out just what the hell it is though and how the hell it got there because I’m stumped.