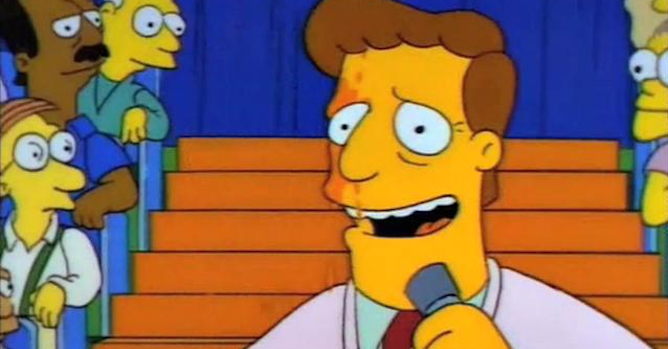 Troy McClure was a pretty great character from The Simpsons with a pretty memorable catchphrase. Check out a a supercut of every time he used it.

Back when The Simpsons was awesome, Troy McClure was always good for a laugh because of the way he always introduced himself with a couple of dumb movies you may have remembered him from. I always remember ‘Dial M For Murderessnessness’ in particualr because well, murderessnessness isn’t a word right?

Then Phil Hartman – the guy who voiced Troy McClure – died so Troy McClure and a bunch of other characters that he voiced in The Simpsons – like the lawyer Lionel Hutz – had to be written out. I don’t really want to say that The Simpsons never recovered from the loss of these characters, as it was probably still good for a few more seasons after they left, but I think everyone knows that The Simpsons definitely isn’t the force it once was, even if the old episodes on Channel 4 are still kinda funny.

I guess as a kind of a tribute to Troy McClure and Phil Hartman, some dude called Christopher Coleman decided to make a supercut of all the ‘Hi, I’m Troy McClure’ moments from The Simpsons and stick it up on YouTube. I’m not really sure why else he would have done it, other than the fact that it’s pretty funny and reminds everyone of when The Simpsons was actually good and of Troy McClure’s extensive back catalogue. That’s four good reasons though sure.

Someone in the comments mentioned that he missed off ‘The Verdict Was Mail Fraud’ which sounds like a good one, but apparently another character mentioned this and not Troy McClure and ‘it’s way better with just Troy McClure in the clip.’ To be honest I’ve gotta agree, I don’t think it would be anywhere near as good with Patti (or was it Selma?) cropping up and saying his lines.

I think my favourite movie out of all the ones he mentioned – aside from ‘Dial M For Murderessnessness’ of course – is ‘Welcome To Springfield Airport.’ Check out the supercut below and let us know which one your favourite is:

â˜› More Of The Simpsons:

A Simpsons Theme Park Is Opening In America