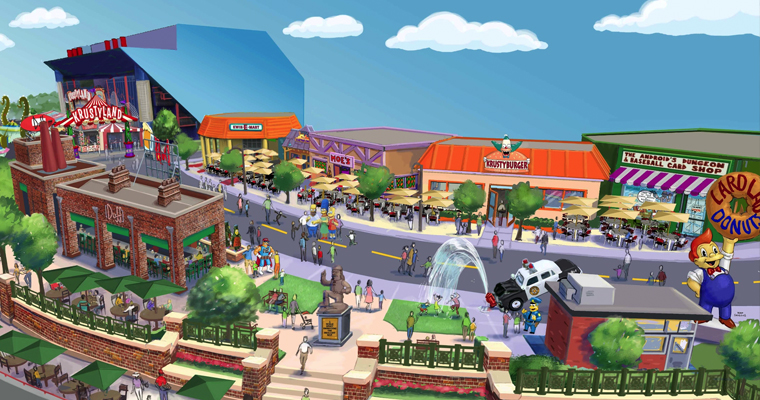 A Springfield based theme park is opening in America with loads of food and shops from the show. Ka-ching Mr. Groening!

When I was younger I always wanted to go to the Beano world at Chessington World of Adventures but never got to because it was miles away. Well now it looks like I wont be able to go to the Simpsons equivalent either. This summer at the Universal Orlando Resort in Florida a replica of Springfield is being built with restaurants and food taken from the TV show – cool huh?

Well the Simpsons money train never seems to falter and this summer you will be able to consume your favourite cartoon munchies at (if you can get to Florida) Lard Lad’s Donuts, Krusty Burger, Cletus’ Chicken Shack, Moe’s Tavern, the Frying Dutchman, Luigi’s Pizza, the Kwik-E-Mart and the Duff Brewery, where they will be making a beer exclusively for the park.

Chances are it is all going to be standard overpriced theme park shitty food and lame rides with a sparkly Simpsons logo, but I’m really hoping they make a decent Duff. I tried some fake Duff in Prague last year which tasted like wet gooch, so the real thing had better deliver. Half of me really wants to get trollied on a bar stool at Moe’s, the other wants to tell Matt Groening to just stop being so goddam greedy. Either way the park is happening and if you still go on family holidays to Florida like all the rich kids at school, go and revel in my inner child’s jealousy with a giant Squishee.

â˜› More Of The Simpsons: Springfield in Real Life