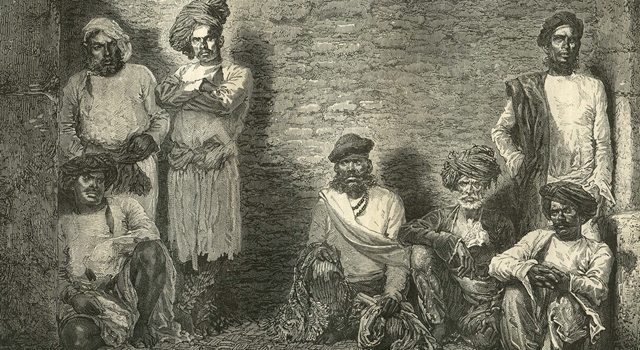 The Thuggee gave us the English word “thug” and it’s easy to see why: They strangled and robbed millions of people and seemed unstoppable.

The Thuggee or Tuggee were a group of blood thirsty, amoral gangs that terrorised Indian travellers for hundreds of years. The name derived from a Hindi word for theft and in turn entered the English language as the word thug.

These pirates of the land were active for around 450 years and are thought to have killed millions upon millions of people. Between 1740 and 1840 alone Thuggee are estimated to have left a million corpses in remote regions. The Guiness Book of Records attributes a total 2 million deaths to them. One of their most infamous leaders, Behram, is potentially the most prolific serial killer of all time and is said to have killed 931 people in forty years. However, figures are unsubstantiated and it may have been that he was only an accessory to some of the killings that he had claimed. Still, exaggeration or not, that is some combined record.

These highwaymen were not lone thieves, but worked as a highly organised network of criminals who managed to evade justice for decades thanks to their sneaky and highly effective modus operandi. The Thuggee would befriend travellers on long journeys and join them for portions of their trip. They would be amiable and charming and earn their victim’s trust. Sometimes they would travel alongside their intended quarry for hundreds of miles, waiting for the perfect time to strike…

â˜› Read Next: Capital Punishment in England: The Bloody Code