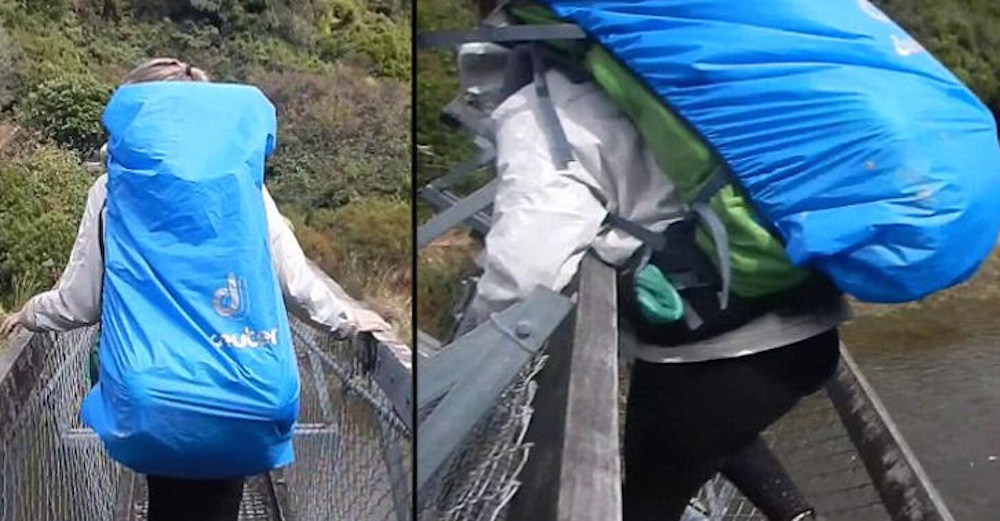 Don’t watch this if you’re scared of heights, bridges or hikes.

I’m deathly afraid of heights like I’ve said numerous times before, and it’s why you won’t catch me crossing over that new suspension bridge in China with the glass floor any time in a hurry, even before I’d seen this video.

This is pretty much everyone who is scared of heights, bridges or hikes’ worst nightmare ever. It’s from New Zealand where four French people were embarking on the Lake Waikaremoana Great Walk when they came to a flimsy suspension bridge over a thirty foot ravine. I’m sure that this bridge has enabled more than enough hikers to get across it safely in the past, but unfortunately for these guys it was going to be its last crossing in its current state.

Fortunately for us, one guy was GoProing his hike (boring or what?) and so we get to see that absolutely pants-crappingly scary footage of a suspension bridge snapping right in front of our eyes. Make sure you watch to the end for a slow motion replay.

Ooof that happens pretty quickly right? Even in the slow motion replay. It’s a good thing they were traveling over a bridge that had a river underneath it, otherwise it’s likely that they might have died, or at least faced some serious injuries. As it was they just had to fall thirty feet into a river and nobody got hurt, but still I bet that wasn’t exactly a rocking experience for any of them.

Apparently the bridge collapsed when a cord holding the bridge ‘released’, whatever that means. Obviously the bridge’s fault then.

If that wasn’t terrifying enough, here’s another video of a bridge collapsing.