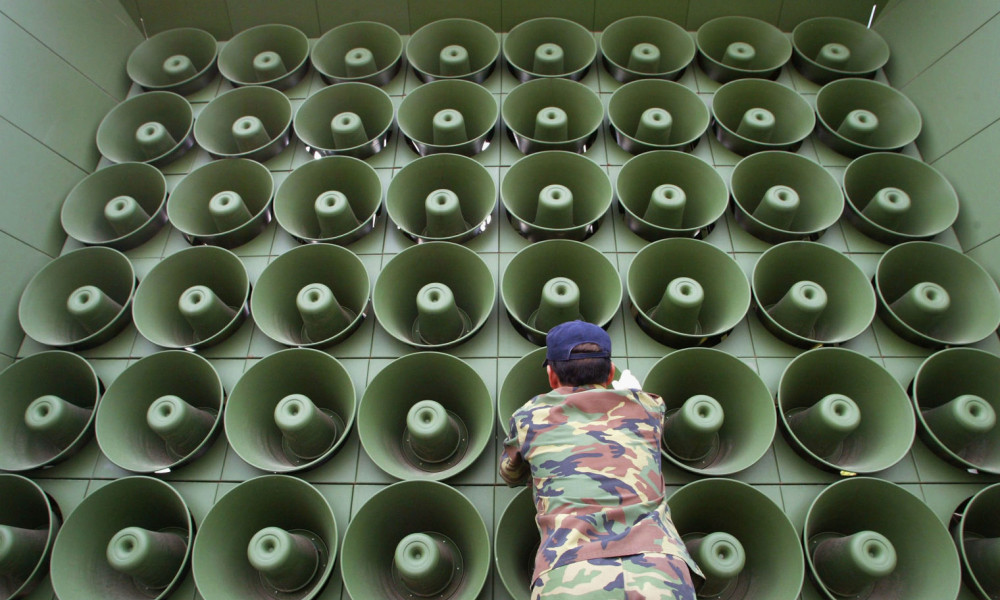 K-Pop coming at you loud and proud.

With Kim Jong-un recently cracking on with his country’s long-held nuclear ambitions by detonating what is suspected of being something like a hydrogen bomb, South Korea responded on Friday with their own kind of retaliation — by treating the North with unbelievably loud K-Pop.

From noon on Friday — Kim’s birthday — South Korea blasted K-Pop out of loudspeakers along the heavily fortified DMZ into the North. The last time the South did something like this, it brought the reclusive hermit regime to a war footing — and then to the negotiating table.

North Korea has been hit with sanctions and other UN penalties over the years, but nothing usually brings the Kim leadership to the negotiating table. The one thing that has seen results however is the aforementioned K-Pop extravaganza. In August the speakers were used in retaliation for the maiming of two South Korean Soldiers by DMZ mines. That escalated into what North Korea called a ‘semi-state of war’ that ended after long talks where Kim’s officials agreed to halt the mobilisation of men. One of the conditions was that the speaker be turned off.

Kim Jong-un isn’t your typical dictator. He’s a god in North Korea, and propaganda broadcasts raise questions among North Koreans about that.

Broadcasts from South Korea can reach deep and far into North Korea’s society, imbuing the minds of its people with the images of a free nation and hurting the oppressive personality cult.

In parliament on Thursday, Defense Minister Han Min Koo said that North Korea’s detonation of what it claims to be a hydrogen bomb constitutes an ‘abnormal situation’. His use of those words is significant as the August pact that ended the stand-off can be annulled under such circumstances. This means the K-Pop can return.

The speakers challenge the things the North Koreans are told about the world and life in their country. They are set up at 11 locations along the border and play messages — lasting 2 to 4 hours — several times a day. They are played at random times to prevent the North from drowning them out with their own broadcasts. The bursts range from K-Pop and recordings of casual conversations to discussions about the importance of human rights and the lives of South Korea’s middle class.

The loudspeaker move could yet backfire, given the level to which the propaganda irritates the regime. Cheong Seong Chang, a senior researcher at the Sejong Institute near Seoul, said:

The resumption of loudspeaker broadcasts may emotionally provoke the North Korean military sensitive to criticism of the ‘supreme dignity,’ rather than help resolve the nuclear issue.

With Kim’s birthday — he is believed to be in his early thirties — falling on the day of the new broadcasts:

North Korea may react in an ultra-strong way to this decision by South Korea, viewing it as an act of ruining a national party.

Hate to see what that might look that — their national party being ruined. Let’s be honest, the national party probably involves a mad synchronised performance at that massive stadium with Kim watching on, as well as a show of might with warheads on wheels and goose-stepping soldiers. If that was ruined, who knows what would happen. Things wouldn’t be as serene as in these vintage tourism photos of North Korea, that’s for sure.