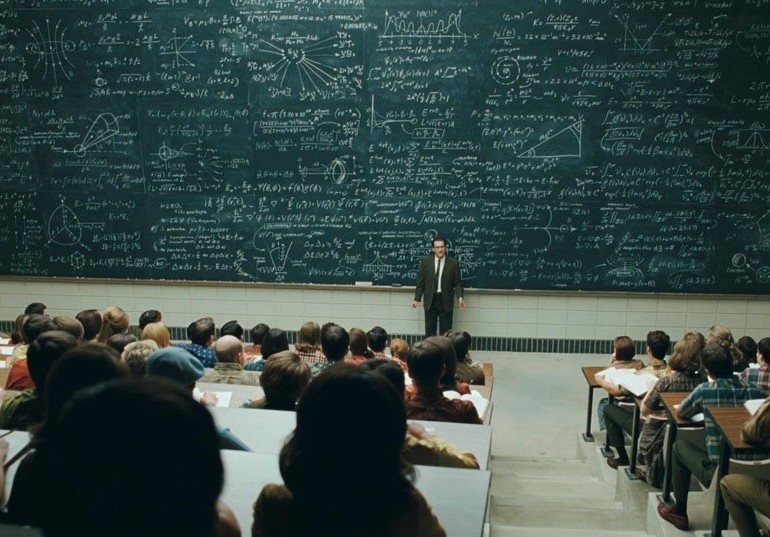 Quantum physics is a twat.

Quantum physics is a bit of a twat. Scientists have been staring at things for centuries, to try and work out what’s going on in the universe and they’ve done a stand up job. Then, a few decades ago, quantum physics came along and just went “nah mate, you don’t know nothing”.

I’m not saying that everything that went before quantum physics was pointless and bollocks, but quantum physics certainly is flicking the two finger salute at the greatest of scientific minds. When you get a bunch of atoms stuck together in the shape of, say, a tennis ball or a turnip you know where you are. If you let go of it, it drops to the floor. You throw it through a hole in a wall and it goes through to the other side. Simple. But when you get those atoms on their own they are complete knobs. They don’t follow even the simplest rules of reality.

For example, recent experiments in Australia have shown that individual atoms can look into the future, see what happens and then decide what they want to do in the past. I know that sounds ridiculous, and it is ridiculous, but it’s also real.

We’re made up of atoms, as you know, so finding out what they do when they are left to their own devices is slightly unsettling. Before I get on to these new Aussie findings let me explain a little more about some of the weirder things quantum physics has already thrown up.

First up: two atoms that are “entangled” can be placed at opposite ends of the earth, when one changes states the other does too. Instantly. So they are seemingly communicating faster than the speed of light. Or something else is going on. No one knows how the hell they manage it. But, irrespective of the distances involved, one entangled atom will change at the exact same moment as its partner, wherever it is in the universe.

Particles, left to their own devices, can also behave like a particle and a wave at the same time. The classic quantum physics experiment that shows this is called the double-slit experiment. I will try to make this basic because it has already given me a headache. I don’t really get it.

The experiment starts like the excellent diagram below shows you. A gun of some sort fires electrons, or light or atoms or whatever at a screen with one or two slits in it. Then the scientists look at the patterns they produce: 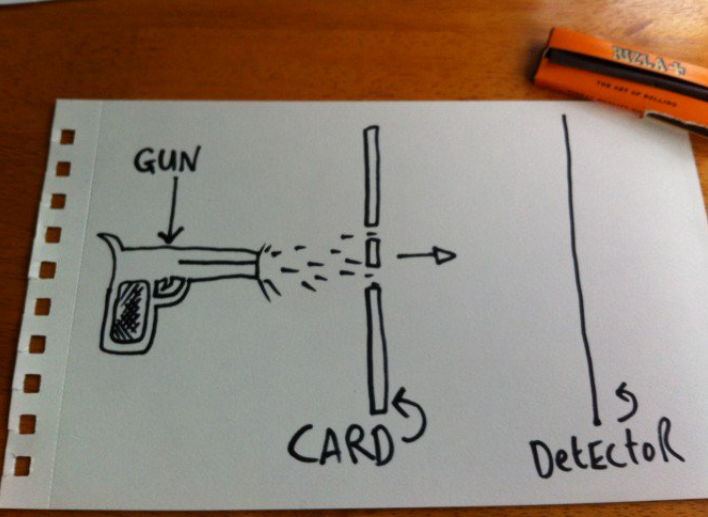 If you fire bullets through the piece of card you get this: 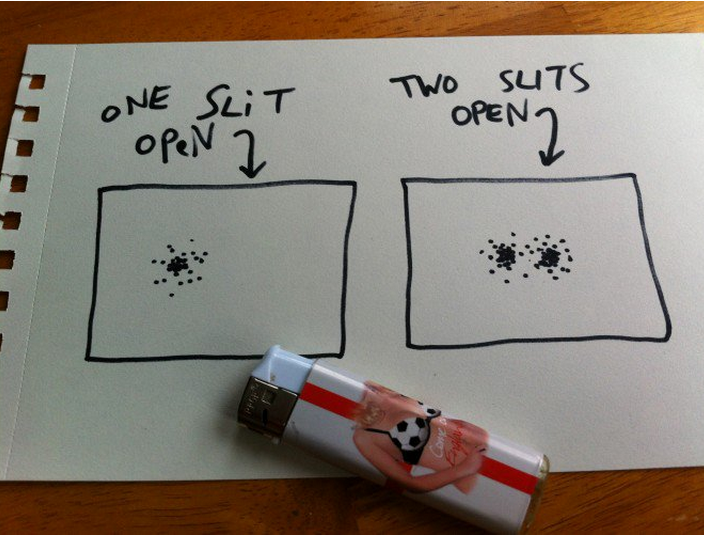 If you shoot waves through the same bit of card they knock into each other like this: 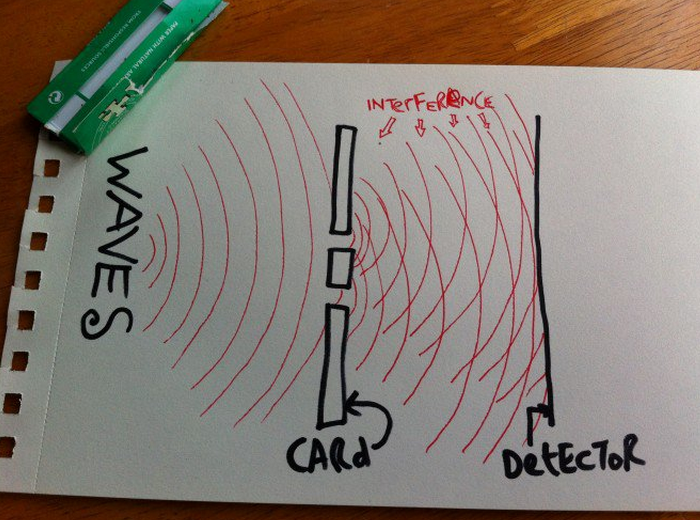 …and they build up an interference pattern like this: 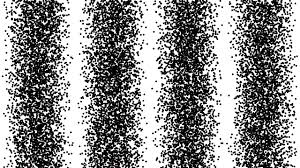 So what happens if you shoot single electrons through the bit of card one at a time? Because they are discrete units you would expect them to behave like the bullets in the first diagram rather than the waves of the second. But oh, no, quantum physics ain’t got time for that.

Predictably, each electron goes through one slit at a time and hits the back wall. But the pattern you get still looks like interference:

So? Well, that means that the electrons are interfering with each other’s journey even though they are travelling one at a time with no way of “knowing” what went before. They make the same pattern as they did when they all went at once… but how??

Nuts yeah? But scientists thought to themselves “ah ha! Maybe each electron is going through BOTH slits like a wave”.

So this time, they did the exact same one-at-a-time experiment but put in a detector so they could detect which slit each electron went through. Now, here’s where it gets really bonkers. When they checked which slits were used by each individual particle the interference pattern disappeared, so it turned out like this again:

This means that the electrons knew they were being watched and switched from acting like a wave and started acting like a standard particle again. WTF. The implications are baffling, but it boils down to the fact that if you’re not watching where an electron goes then it acts like a wave, but as soon as you look at it, it acts like a particle. WTF. WTF.

OK, so now we’re going on to the next level. These new findings from the Australian University are one step further down the weird ladder. Descend, if you will, into oddity central, the weird grand wizard’s circus of freaks.

This time the scientists used helium atoms, i.e. something with mass, an actual ‘thing’. And they did a new version of the double slit experiment described above. 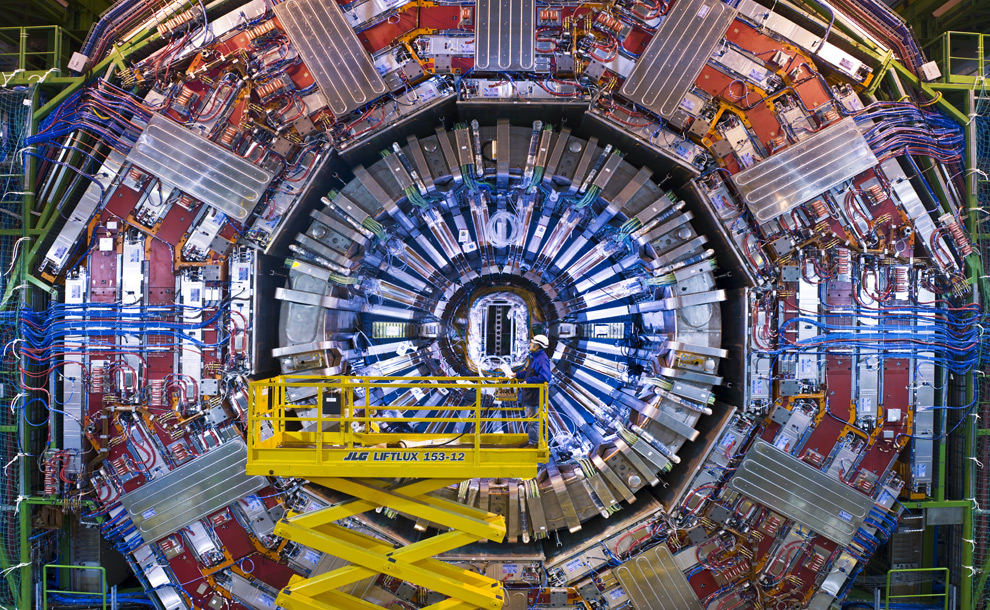 Does this count as time travel? Kind of, yeah. It changes its initial state AFTER it has already travelled some distance. It punches cause and effect in the face. Atoms seem capable of changing their past whenever they fancy it. The future CAUSES the initial effect.

See what I mean? Quantum physics is a twat.

Sick Chirpse Half Arsed Guide To The Higgs Boson

4 Things Your Brain Does That Science Still Can’t Explain