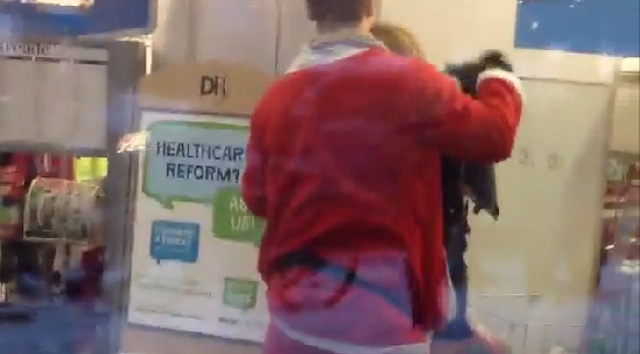 Normally if you’re a badly behaved Santa at Santacon you’ll be puking or fighting, but this guy got jerked off in a pharmacy store instead.

Santacon always seems to bring out the worst in people, but usually it’s in the form of people puking up everywhere or fighting each other for no reason like in the huge Santacon brawl that we featured yesterday. It’s not normally in the form of a Santa getting jerked off by one of his little helpers in a grocery/pharmacy store though, which what makes this video special. Granted, this is normally because everyone at Santacon is jacked up alpha male meathead, so you’re more likely to see two ‘bros’ jerking each other off, and again this makes this video all the more special.

It went down in New York City (of course) over the weekend and was filmed by some other Santa bro on his Instagram video feed. You can’t actually really see Santa being jerked off up close, but it’s pretty clear that something is going on between them and it definitely looks like she’s giving him a tug. The only question is why the hell they would be doing it in the front aisle of the pharmacy store – I mean I know it’s cold out on the street so it’s probably pretty hard to get a boner, but they could have at least gone to a bathroom or somewhere else in the store rather than the very front, right?