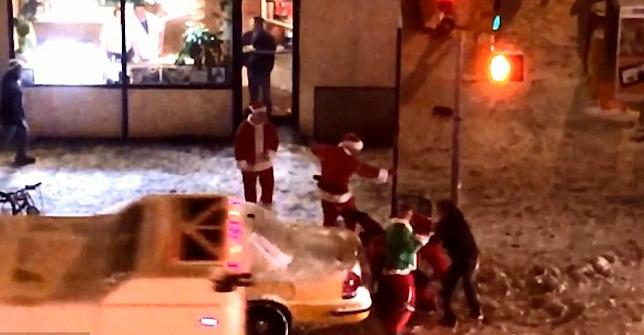 Every year at Santacon everyone is so trashed that there’s inevitably some kind of mass brawl involving a bunch of people dressed as Santa, and every year it’s undeniably awesome.

If you haven’t heard of SantaCon then it’s a holiday bar crawl/walk around the city drinking out of paper bags where everyone dresses up as Santa Claus and everyone sings Christmas songs and gets completely and utterly trashed. It happens in cities all over the world and because it starts in the early afternoon you normally see a bunch of Santas passed out on the street or puking their guts out as the night progresses.

Or, as is the case in this video a bunch of meathead Santas beating the shit out of each other and fighting for no good reason in the snow in New York City. I don’t actually know the circumstances behind the fighting but I doubt it was anything that important. What is important is that you get to see a whole bunch of Santas laying into each other and that some of the punches in this are super brutal and the Santas are slipping and sliding all over the snow. Entertaining.