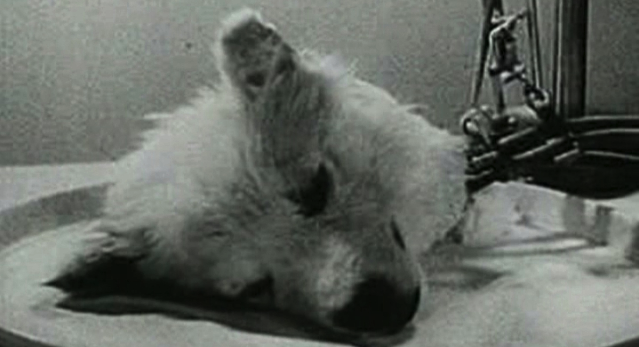 Back in the 1940s, Russian scientists were so messed up that they tried to keep dogs alive without their heads for some reason.

This is completely freaky and bizarre and bordering on not even being believable, but then you remember it’s the Russians and as we all know ANYTHING can happen in Russia.

Basically, back in the 1940s Russian scientists were experimenting on the revival of mammals and organisms and in this video they’re trying to keep a dog alive without a body with the aid of heart and lung machines. To say that this is fucked up beyond belief would be a mild understatement. I mean aside from the fact it’s really freaky anyway, the fact that they even wanted to keep dogs alive without their bodies beggars belief because I can’t even think of any purpose that this would serve whatsoever.

It is Russia though, so I guess I shouldn’t really be that surprised. The video is said to come from the 1940s –  it’s narrated by the British scientist J. B. S. Haldane, who also appears in the introduction and the experiments are credited to Doctor Sergei S. Bryukhonenko.