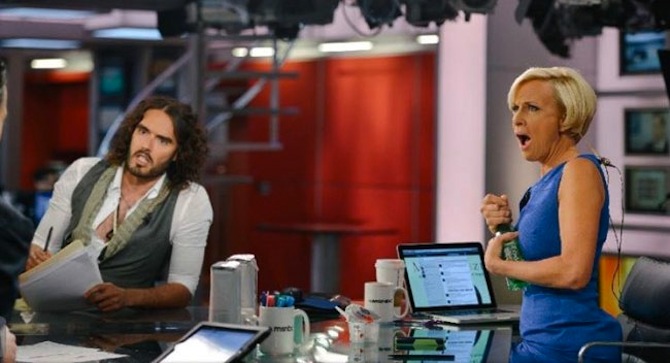 Watch Russell Brand take the mick out of three news anchors who have no idea how to interview him properly.

The main anchor — Mika Brzezinski — mentions right away that she knows little of Brand’s work, and has done no real research before interviewing him.

She is possibly the worst person to have ever been on the receiving end of his banterous nature.

They make a big deal out of Brand’s accent and how they can’t understand it.

They keep referring to him in the third person, when he’s sitting right there.

No matter your opinion of Russell Brand, you have to admit he is a master piss taker. He conducted one of the best TV interviews of last year when he spoke to those clowns from the Westboro Baptist Church, and now here he is with a group of very different idiots who are this time asking him the questions.

Brand takes it all in his stride though and takes shots where he can, drawing attention to the main anchor’s low-cut blouse and later suggesting she is making a sexual gesture with her hands. At one point he pretty much takes over the interview and in the nicest way possible, makes it clear that the unprofessionalism of their interview approach is not lost on him.