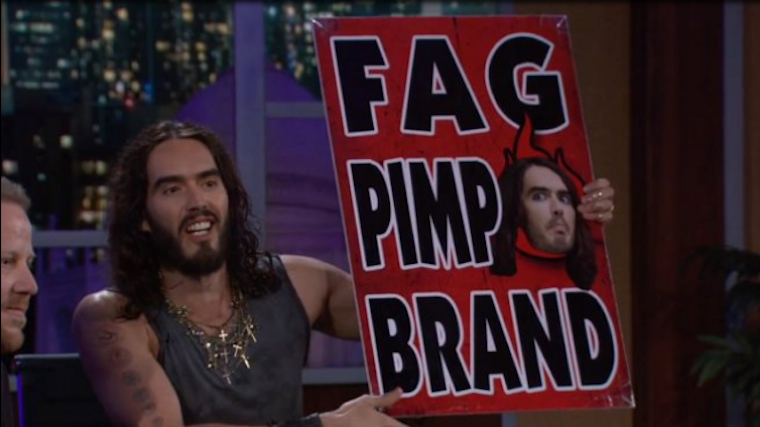 It’s probably your worst nightmare to have to hang out with homosexuals if you’re a bigoted member of a Southern church, so that’s exactly what Russell Brand makes these two idiots do. It’s great fun watching them squirm.

So this clip has been floating around the internet for a couple of days and it’s pretty awesome because although nobody really likes Russell Brand he completely handles these fvcking close minded Southern retards like a boss. It turns out that Russell Brand is quite the celebrity over in America and has his own talk show that looks exactly like David Letterman over there called Brand X. You get it? Brand X, because he’s like Russell Brand and obviously it’s gonna be pretty outrageous right because he’s Russell Brand and he’s wacky and outrageous, so hence tacking the X on the end? Perfect.

Anyway, in this clip Russell has invited a couple of members of the Westboro Baptist Church onto the show to discuss their attitudes regarding why they hate gay people. The tone of the show is set when the two douchebags come out with a sign saying FAG PIMP BRAND with a picture of old Russell on it and with one of them wearing a t-shirt that says PRIESTSRAPEBOYS.COM (I haven’t bothered to check out that URL because the government might flag my computer for child abuse or something, but feel free if you’re so inclined. I didn’t link it either because of the same reason) and they proceed to justify their stance with multiple references to the Bible and how it condemns the wicked ways of homosexuals and consigns them to hell for eternal damnation following their life of sin.

Russell Brand is remarkably calm and not a twat when talking to them which is kind of surprising and even commends them at the start of the show for ‘being very brave and coming out to explain their views in front of a lot of people, which takes a lot of courage.’ It’s this attitude towards the interview that actually makes it work so well and leads to dumbass rebuttals from the two guys such as ‘unlike God, you don’t have any power yourself though Russell DO YOU?’ whereas Russell is actually surprisingly eloquent and calm in his arguments. This only serves to make the two meatheads look like even bigger dickheads as they constantly raise their voices and refer back tot he Bible for justification of their caveman mentalities.

The interview is about ten minutes long and there’s a good seven minutes or so of these guys being idiots and trying to explain their views and also a pretty cool game where Russell Brand names some celebrities and these dudes tell him whether they are going to heaven or hell. SPOILER – every single one of them is going to hell. However, the piece de resistance of the interview occurs when he brings out some gay guys to talk to the Westboro Baptist church and they just squirm and look awkward and shout even more about what it says in the Bible. The best part is where Russell Brand tries to get them to hold his hand and they recoil like a snake has just bit them or something. I really think this part of the show probably should have been longer (it probably was on the actual show) because it’s easily the best part but it really does highlight how dumb and behind the times some of the people from the south are and it really makes me happy that Mitt Romney didn’t get elected and has to go and watch Twilight films instead.

You can enjoy the video below:

â˜› More: Russell Brand Wanks Off A Man In A Soho Pub Toilet