If you were going to Comic Con and dressing up as someone, would you pick Ron Jeremy? Me neither, but this guy did and created one of the most realistic masks I’ve ever seen.

Last week at the San Diego ComicCon there were obviously a bunch of people cosplaying and dressing up like their favourite characters but I don’t think any of them were anywhere near as disturbing as this guy. I mean I know Ron Jeremy literally has what every other guy wants (except maybe that freak Jonah Falcon) but if you’re going to a ComicCon you might as well dress up as someone really cool like Wolverine or Batman or Bane.

OK OK I know everyone dresses up as the most popular character but you can probably think of someone cool that not everyone wants to dress up to that might be slightly unique. Like Iceman or Gambit or someone from a slightly obscure TV show like The Shield or  Rookie Blue or something.

I can’t really think why anyone would think it was cool to wear a Ron Jeremy costume though, I mean it’s kind of cool to laugh at once but then you would probably just think the guy was an idiot because he came dressed up as a smut star FFS and the only guys that can pull off being smut stars are ACTUAL smut stars. Everyone else just falls short. The mask is crazy too and I doubt you can buy them so he must have spent a shitload of time actually MAKING it so it wasn’t even like a spur of the moment kind of decision or anything. Some people huh?

Anyway, here’s the weirdo in his mask:

Anna Amemiya – Can Japan Get Any More Weird? 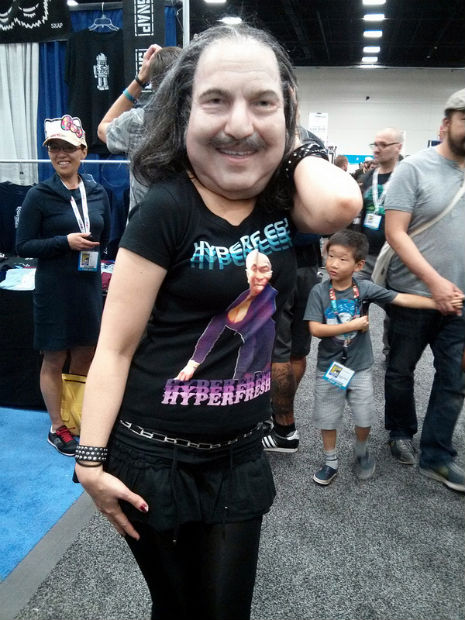