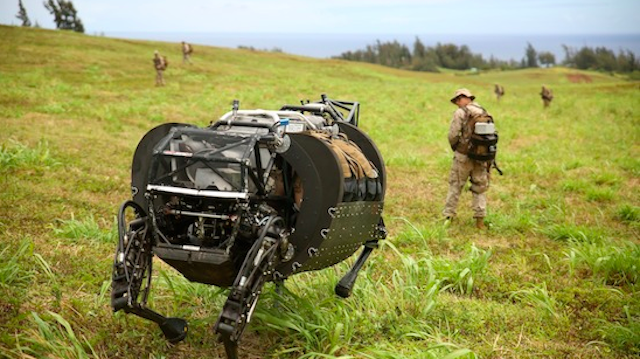 More proof that it’s only a matter of time before The Terminator and Skynet exist in real life.

Following on from other recent terrifying technological advancements, like robotic tattoo artists and robot sex machines, this latest military development might be the scariest of all, especially when you consider the implications.

This is a robotic mule known as the Legged Squad Support System or LS3 and its purpose right now is to carry equipment for marines in the field in order to reduce the load that they have to bear, as sometimes they have to carry up to 100 pounds through miles and miles of turbulent and dangerous conditions. However, it seems pretty obvious that it’s only a matter of time before you see guns mounted on top of one of these bad boys in the field.

The LS3 has been developed by Google and uses computer vision to follow the marine ahead of it, who has a sensor strapped to their foot which allows LS3 to follow it. Pretty hi-tech right? In the video below the LS3 is following Lance Corporal Brandon Dieckmann across a field in Oahu in Hawaii.