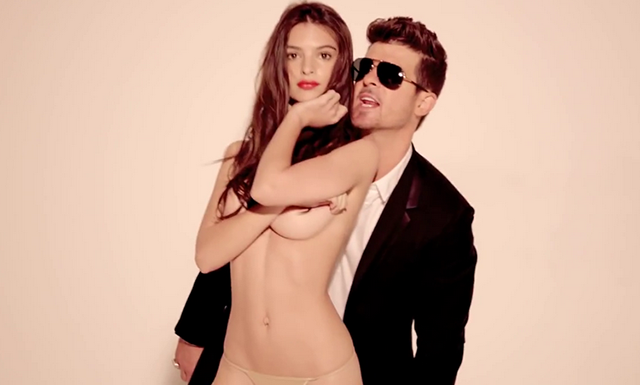 This is gonna get dirty.

Robin Thicke, AKA the guy having the worst year ever, is currently dealing with a suit filed by Marvin Gaye’s family claiming that ‘Blurred Lines’ rips off the late singer’s ‘You Got Give It Up’.

Here’s what’s been going down in the court room, courtesy of Rolling Stone:

The singer says under oath that after writing and producing six albums himself, “I was jealous and I wanted some of the credit… I tried to take credit for it later because (Williams) wrote the whole thing pretty much by himself and I was envious of that.”

“Q: Were you present during the creation of ‘Blurred Lines’?

Thicke: I was present. Obviously, I sang it. I had to be there.

Q: When the rhythm track was being created, were you there with Pharrell?

Thicke: To be honest, that’s the only part where – I was high on vicodin and alcohol when I showed up at the studio. So my recollection is when we made the song, I thought I wanted – I – I wanted to be more involved than I actually was by the time, nine months later, it became a huge hit and I wanted credit. So I started kind of convincing myself that I was a little more part of it than I was and I – because I didn’t want him – I wanted some credit for this big hit. But the reality is, is that Pharrell had the beat and he wrote almost every single part of the song.”

Thicke then completely throws Pharrell under the bus:

Thicke says he was just “lucky enough to be in the room” when Williams wrote the song. Afterwards, he gave interviews to outlets like Billboard where he repeated the false origin story surrounding “Blurred Lines” because he says he “thought it would help sell records.” But he also states he hardly remembers his specific media comments because he “had a drug and alcohol problem for the year” and “didn’t do a sober interview.” In fact, when he appeared on Oprah Winfrey’s show with his young son and talked about how weird it was to be in the midst of a legal battle with the family of a legendary soul singer who “inspires almost half of my music,” Thicke admits he was drunk and taking Norco – “which is like two Vicodin in one pill,” he says.

How did Pharrell respond?

“Q: In your view, what holds ‘Blurred Lines’ together throughout the different sections?

Williams: What holds it together?

Q: Does the bass line and the keyboard hold the songs together through the different sections?

A: Because it’s the white man singing soulfully and we, unfortunately, in this country don’t get enough – we don’t get to hear that as often, so we get excited by it when the mainstream gives that a shot. But there’s a lot of incredibly talented white folk with really soulful vocals, so when we’re able to give them a shot – and when I say ‘we,’ I mean like as in the public gives them a shot to be heard, then you hear the Justin Timberlakes and you hear the Christina Aguileras and you hear, you know, all of these masterful voices that have just been given, you know, an opportunity to be heard because they’re doing something different.”

Just goes to show for a while there Robin Thicke had it all going on — smash hit song, happy marriage, great album sales but fast forward one year and he’s a divorced alcoholic drug addict who everyone hates. It’s a tough life being famous.

Arguably better than the spot he was in during 2002 at least.