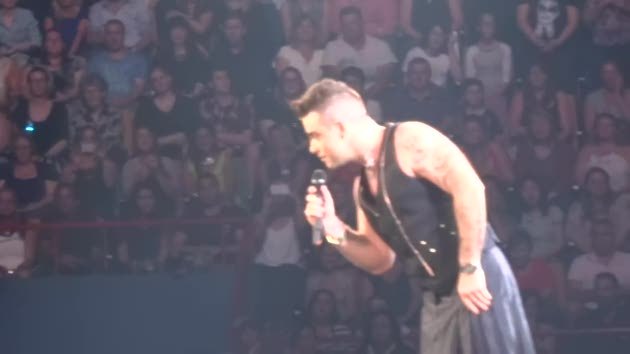 One of our readers, a 25 year old, sent in a Confession that they’d been hit on by a 16-year-old on the train but ultimately decided to diffuse the situation as taking things further might’ve been just a tad creepy considering the age difference.

Now imagine doing something similar in front of a crowd of thousands of people, except you’re not just some randomer no one knows on the train. You’re a 41-year-old international mega star, and the girl you’re saying looks like a sexy secretary is only 15.

Robbie Williams was about to perform ‘She’s The One’ in Brisbane, Australia, when he properly put his foot in it:

Whoops. That’s never a good look really, except Robbie Williams is such a don that he styled it out in the best way possible. In fact he made that girl’s entire life with that comment and probably took her mum home with him afterwards too. All in all he turned some potentially damaging video footage into a big fat positive and then (maybe) got laid afterwards too. That’s just what Robbie Williams does.

Whatever way you look at it, it’s got to be better than getting body-slammed off stage by one of your fans.