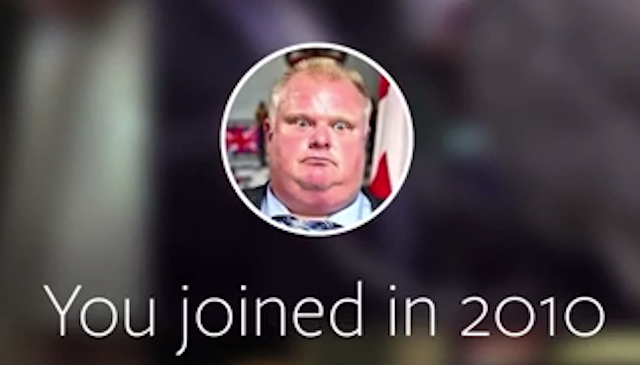 Rob Ford has a pretty unique life so it makes sense that his Facebook LookBack would be a lot better than the crappy one you posted on your wall today.

If you’ve been on Facebook in the last few days, then you would have seen a bunch of morons sharing their ‘LookBacks’ all over their walls, trying to show everyone how impressive their lives have been since they joined Facebook, even though most of them only feature what everyone else does e.g. getting married, having a baby, meeting someone famous, getting so fucked up you do something stupid and get a bad photograph out of it etc etc. This doesn’t stop people sharing them though because you know, everyone is just so unique.

Anyway, someone who is most definitely unique is Toronto mayor Rob Ford, in that he’s probably the most unique mayor who’s ever lived as smoking crack, talking about eating pussy or talking in a Jamaican accent when he was very drunk are all incidents he’s been involved with in the last six months. It doesn’t seem like Rob Ford can keep out of the news if he tried.

So some smartass Torontonian thought it would be a good idea to make a Facebook LookBack for his time in politics and guess what? It still sucks, but it’s probably better than the one you posted on your wall earlier today.