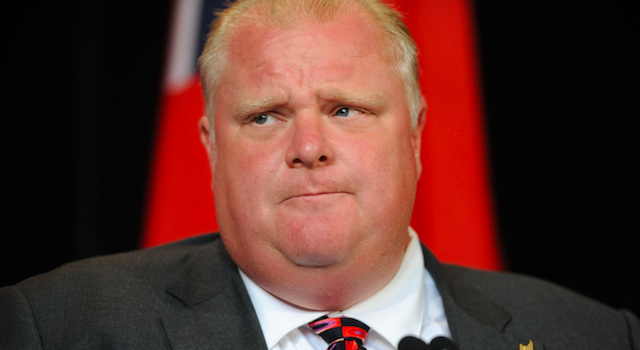 Rob Ford has put his foot in it again. Not content with being one of the first elected officials to be filmed smoking crack, he’s offended residents of Toronto and the world with his latest outlandish comments where he claims that he doesn’t need to eat the pussy of his former special assistant Olivia Gondek because he has enough to eat at home with wife Renata Ford. Ewwwww.

Olivia Gondek is currently suing Ford over making inappropriate comments, hence the reason for Rob Ford bringing this up in a live press conference, although I don’t really think there was any need for Ford to be so graphic and crass in his language, and it seems as though literally the whole world has been offended about it. I’m not really offended personally – I think it’s refreshing to hear politicians talk like normal people – but I can understand why the rest of the world wouldn’t think that and how it just makes Ford’s tenure as mayor look like EVEN MORE of a joke than it already currently looks.

Ford and his wife apologised later in the day yesterday, with Ford saying he was sorry about his language and that ‘when you attack my integrity as a husband and a father then I see red’.