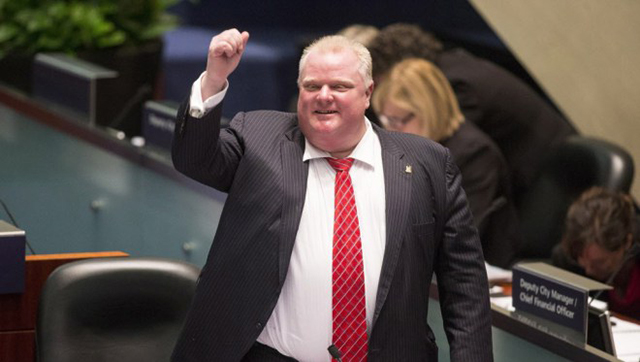 In any rehab facility, the crackhead mayor is king.

A few weeks back we brought you the joyous news that Rob Ford was out of rehab and heading back to the Mayor’s office — it now turns out that he was removed from a group therapy program because he was abusive to other recovering addicts.

Ford broke things, got into fights with other residents. He literally had the run of the place. There were no rules around Rob Ford.

He “physically and verbally abused” other residents and “shoved and argued with them”. He “swore, shouted and refused to listen to others during group sessions” and would pretty much ruin everything by not letting the other addicts share their stories which is key to the rehab experience.

Eventually they had to let him have one-on-one sessions with a private counsellor.

So are these other recovering addicts a bunch of cry babies or is Rob Ford really that brutal of a guy to be around? Sure he’s loud and overbearing but we always assumed it was in a funny loveable fat guy kind of way. Let’s also not forget that crack addict or not, Rob Ford is the MAYOR of the biggest city in Canada; he’s not some jobless crack head like the rest of the people in therapy with him.

P.S. Can just imagine Rob Ford pretending to fall asleep or yelling BORING every time someone tried to share their deepest, darkest secret in therapy. Basically the arsehole fat kid in class who bullies everyone and ends up failing all his exams and becoming a crack addict.