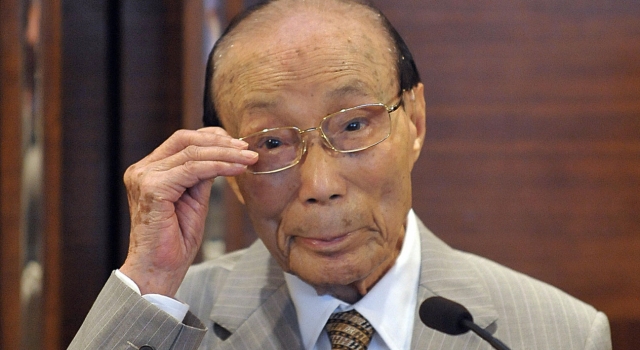 Bow solemnly in memory of the titan of world cinema who died earlier this week and helped influence everyone from Tarantino to the Wu-Tang Clan.

It is at this point that some of you may well be wondering to yourselves, “who the fuck is Run-Run Shaw?”. Well I’ll tell you who he is: Shaw, who died on Tuesday aged 107, sowed the seeds that would go on to influence some of the greatest art ever made.

Sir Run-Run Shaw was a pioneering Hong Kong entertainment mogul and philanthropist who co-founded the legendary Shaw Brothers film studio in 1958. The studio was, at the time, the biggest that Hong Kong had ever seen and cranked out thousands of films, including a slew of seminal kung-fu pictures. Shaw Brothers was the Motown Records of Oriental cinema: it was run as a production line that would churn out product in massive quantities. Its output included a ton of martial arts films, many of which are now hailed as classics.

More than any other studio that had come before it, Shaw Brothers was a vital conduit in introducing Western audiences to Kung-Fu flicks and earned itself innumerable devotees over the years. One of them was Quentin Tarantino, who once said in an interview that in preparation for making Kill Bill he would spend an entire year watching “one old Shaw brothers movie a day, if not three.” The Shaw Brothers’ iconic logo and fanfare is used at the beginning of both Kill Bill films in homage.

Wu-Tang Clan mastermind/head honcho RZA was another Shaw Brothers devotee. Dialogue from SB films appears over a number of Wu-Tang tracks and the title of group’s debut album, Enter The Wu-Tang Clan (36 Chambers) was inspired by the 1978 classic The 36th Chamber Of Shaolin;

Bobby Digital himself even showed some love to Shaw on Twitter;

Sir Run Run Shaw and his brother released so many inspiring films that influenced me. We lost a true film icon who will never be forgotten

â˜› Read This Next: Kim Jong-Un Fed His Uncle To The Dogs

But that’s not all. The Wachowkis, creative masterminds behind the Matrix Trilogy, were Shaw Brothers disciples. The studio’s television offshoot also gave big breaks to heavyweight Hong Kong talent like action movie god John Woo and his inimitable leading man and super badass, Chow Yun-Fat. And if all THAT wasn’t enough, Shaw also helped stump up a hefty wad of cash in order help make Blade Runner, widely acclaimed by anyone who isn’t an idiot as One Of The Best Things Ever;

When a man lives to the grand old age of 107 and dies peacefully (and a billionaire to boot), there is less need to mourn and more need to celebrate that man’s achievements. Sir Run-Run Shaw achieved a whole lot (he  failed to snap up Bruce Lee over a pay dispute, but let’s not dwell over that one). We salute you, grandmaster.

â˜› Read This Next: Nobody Skates Like Gou Miyagi