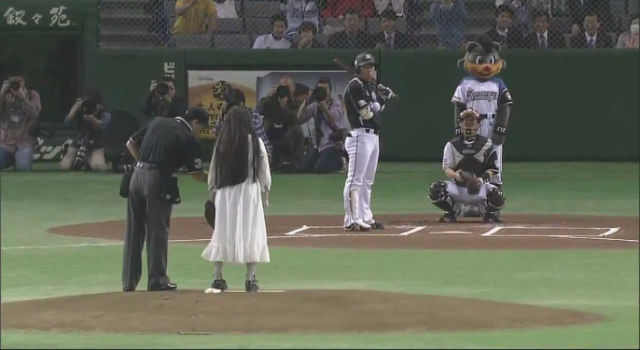 The horror icon has skills other than ending people’s lives in a sudden and horrific manner.

She may not be much fun when she’s crawling out of your TV set and killing you with her brain, but Sadako is dead handy when it comes to baseball. The iconic star of The Ring movies has caused much raising of voices and soiling of pants in her time but is now branching out by taking part in popular sporting events. Makes a change, I suppose.

â˜› More Japan: The Most Amazing Prank We’ve Ever Seen

The lank-haired she-demon recently made an appearance earlier this month at a Japanese baseball game between the Seibu Lions and the Softbank Hawks in order to promote her new film Sadako 3D2. Rather than make her presence felt by murdering people, she opted for a more positive approach and threw the ceremonial first pitch, escorted to the field by adorable mini-versions of herself

The mini-Sadakos dutifully follow their matriarch into stadium before striking a pose and projecting pure evil towards her in order the strengthen her pitching skills. Their tactic was clearly a success, as the resulting pitch apparently clocked in at 64mph. Sugoii!

Check out the footage below – we particularly like what happens after she throws the pitch. Kawaii!