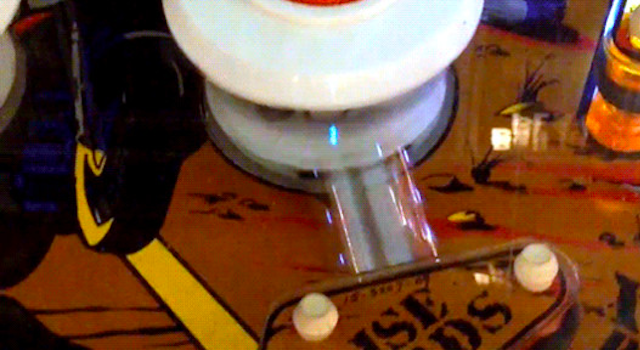 Everyone who has ever played of pinball and dreamed of the high score has tried to make this happen, and everyone has pretty much failed too.

Pinball is a lot of fun but most people seem to be fairly useless at it, except for that greasy guy you used to see at the edge of the arcade flipping balls and getting high scores like it was no big deal. Unfortunately for him though he didn’t have any friends and the only reason he was any good at pinball was because he literally spent all his time playing it and not doing much else. Still, he was the envy of everyone because he had that high score.

Until now that is. Some kid managed to pull off the trick that everyone who has ever played pinball has tried and failed to achieve – when you get the ball stuck perfectly between the bumper and the kicker so that the run racks up literally unlimited points. The video is only 30 seconds long but the kid who filmed it reckoned it went on for a few minutes and only stopped because the bumper’s solenoid ran out.

Needless to say, he got the high score and is now revered every time he steps into the arcade. Bastard.

â˜› More Pinball: Spanish Cop Gets Dropkicked Then Pushed Around Like A Pinball During Riots

â˜› More Gaming Cheats: How To Get Unlimited Lives In Candy Crush Saga