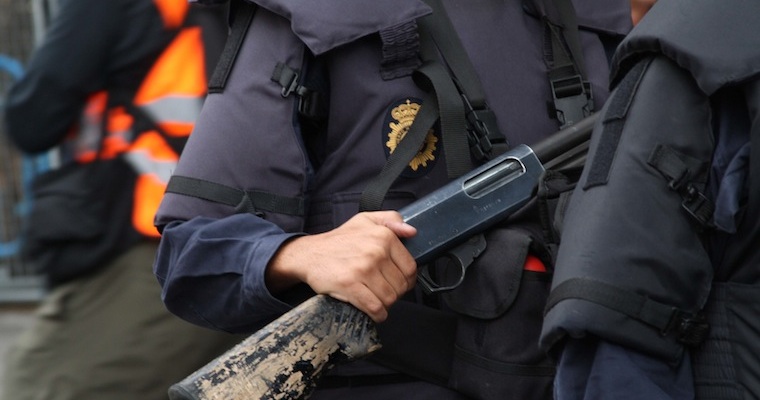 In case you didn’t know, shit’s kicking off in Spain right now. Here’s a video of a Spanish policeman getting dropped kicked by a protester.

In case you didn’t know, shit’s kicking off in Spain right now.

There have been huge protests over the last few days, mostly against the state of the Economy in Spain, and the ways that the Spanish Prime Minister Mariano Rajoy plans to sort these problems out. Mariano Rajoy is in charge of sorting out massive debt that Spain has built up over the last how ever many years, with the total amount nearing 18 billion euros. And you thought your student loan was a ball ache?

In attempting to sort out Spain’s financial mess, Mariano Rajoy wants to introduce Spain’s 2013 austerity budget, that will include cuts across many budgets, and basically make things shitter for people who’ve already got it pretty shit. That’s basically the lower and middle class becoming more out of pocket than they were.

Now the Spanish people don’t like this at all, and the Spanish people love protesting just like the rest of the world. Last year we had the stupid UK riots which was basically a load of chavs looking for an excuse to loot and fvck up their towns, last week we had protests and riots in the Middle East over some stupid drawing of some guy who probably never even existed, and this week we’ve got protests that are turning into riots and violence because the Spanish people are sticking a big middle finger up to their government and Prime Minister.

There are live streams of the Spanish protest all over the net, just Google it and you’ll find one. I was tuned in the other night getting baked hoping for some shit to kick off but it never did, so I called it a night and switch off. Turns out I turned off at the wrong time because shit did kick off!

So, shit’s popping off and protesters are getting angry. It’s getting dark and quite a few people have probably been drinking due to sheer boredom of the original protest, and tempers begin to flare. Police start hitting back at protesters and drag some dude away to give a him a good kicking. Next thing you see is one of the Spanish cops getting drop kicked by a protester before being pinged around like a police pinball amongst a huge pinball machine with the angry protesters being the bumpers and little flappy bits flicking the ball up the machine. I really hope the cop was OK though because no one likes seeing a policeman getting some grief back after lashing out at protesters. Check it: