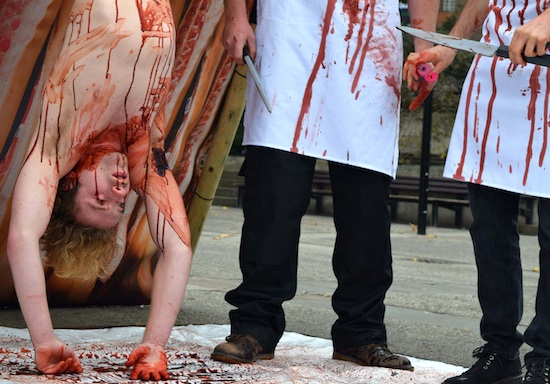 Give it a rest guys.

I’m sure you will have heard that it was World Vegan Day yesterday as at least one person you know/friend of a friend wouldn’t shut up about it.

If you are really lucky though, you might have been hanging out in London where you could have seen PETA stage mock executions of two of their members, really driving home the point of how cruel the process of eating animal products can be. We got the picture already.

Here’s what PETA had to say about the demonstration:

We really do feel if the general public knew what happened to billions of animals, if they realised that that steak they’re buying on a supermarket shelf was a cow, who had his throat slit while fully conscious, whose life was just ripped away from him, they wouldn’t want to eat that – there are so many better alternatives.

It is such needless violence, it’s been proven time and time again how much better a vegan diet is for both your health and the environment, so on World Vegan Day we really should be looking inside ourselves and thinking what can I do to end this violence.

This is actually a pretty gross and disturbing video so maybe don’t watch it if you’re a bit weirded out by people being executed:

Great. Like I said, we got the picture. Doing stuff like this is just kinda weird and just more likely to piss people off with their constant activism. More and more people are switching to a vegan diet and if you ask them if it’s because of stunts like this I bet they’d probably say no. Happy to eat my words though if I’m wrong.

If you enjoyed this and want to see similar stunts, check out this other demonstration from about six weeks ago. Just to prove I don’t completely hate vegans too, here are three pro vegetarian arguments that you can’t question at all. If you convert, please say it’s because of that and not shock tactics like these.