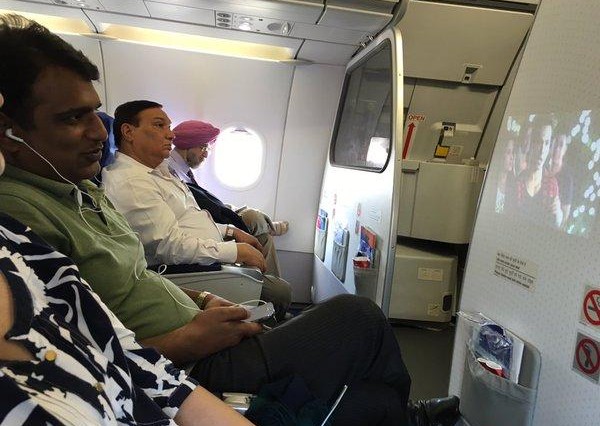 He didn’t even stop when she told him.

Piracy is a common thing these days. No one bats an eye if someone says they have a ‘version’ of Star Wars on their laptop, and obviously if they do, then they’re industrious, sick guys, and not thiefing wreck heads. Such is the accessibility of pirated films on the internet, that nowadays it’s not impossible that you could watch a pirated film with the star of the film right next to you — not likely, but possible.

This is what happened to Bollywood actress Kriti Sanon on a recent flight, as the passenger next to her watched her movie, Dilwale, whilst it is still in theatres. The film is a musical rom-com that was released only a few weeks ago, it has played extensively in India and a few other markets, but has gotten a limited North American release as well.

Sad to c the hardwork of so many ppl bein watched in such pathetic quality!Pls enjoy films in cinemas #SayNoToPiracy pic.twitter.com/SBFpLkm2DA

How about that for obnoxious? Rather than go to the cinema and add to the coffers of everyone involved with Dilwale, the guy opted to project a pirated version in the most bait way imaginable. Sanon tweeted the hashtag #SayNoToPiracy, but the guy with the pirate film and projector didn’t stop after being asked to by the Bollywood actress.

There’s actually two layers of dick head about this, as not only has he watched it right next to her, but it’s also that he’s projected anything at all. Who uses a projector on a plane? A personal projector? Cunt.

Why not watch it on a laptop or tablet, why bring along a mini projector so that all the passengers around you can see it but not hear it. The quality would have been made to look much worse being projected onto a patterned wall in a bright plane cabin. The guy could have watched another film at least, doesn’t he know the most torrented film of 2015?