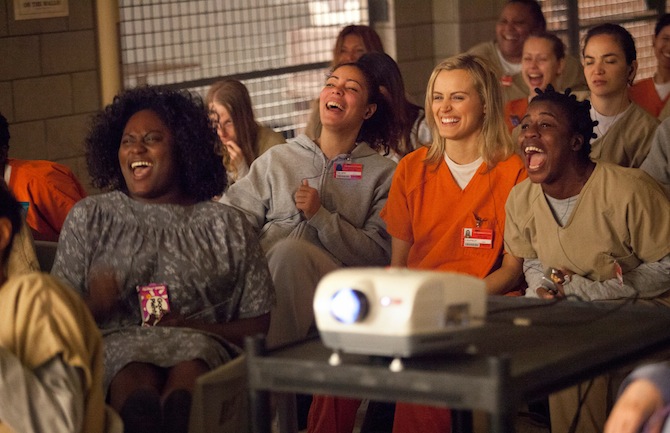 Sick Chirpse loves the hell out of the video streaming service’s new show. Here’s why.

Any chump can spend a gorgeous summer’s weekend playing outdoors in the sunshine, which is why your correspondent has spent almost all of his recent free time fastened to his sofa eating snacks and watching TV like some sort of guest-in-waiting for the Jeremy Kyle Show. The main reason for such slovenly behaviour was that I was binging on episodes of Orange Is The New Black, the new comedy-drama screening exclusively on Netflix which is so goddamn good that I feel compelled to spew words all over your screen about it.

[yframe url=’http://www.youtube.com/watch?v=nryWkAaWjKg’]
Based loosely on the memoirs of a real-life former inmate, OITNB is an ensemble piece set in a fictional women’s prison in upstate New York. It is also one of the most vital and compelling new dramas I’ve seen in quite some time. Even dissecting the reasons I love it seems daft as you’re better off actually watching it then sitting here reading some dude reeling off its merits like that annoying guest at a dinner party. But please keep reading because I have a big ego and I need constant validation.

The story is centred around Piper Chapman, a woman in her early thirties who must abandon a cosy domestic life with her fiancee after a past indiscretion catches up with her and lands her in the clink for 15 months. Piper is white, educated and well-mannered, which makes her a fish-out-of-water amid the rogue’s gallery of fellow inmates and prison staff.

Parts of the show are comedic, other parts are dramatic, but all of it is 100% awesome. And it isn’t an easy sell by any means, with an almost all-female cast and no big-name stars. It must resort to good-old fashioned raw talent to make it work and that is why I love it so. The writing, characterisation and story development are all top-notch, and the cast is simply magnificent. Special must mention must go to Taylor Schilling, the show’s lead, whose shelves at home will soon be groaning under the weight of all the awards she will be getting for being an amazing actor. This girl can transmit the full range of human emotion and make it look effortless.

The show is entertainment first and foremost, but it’s also not afraid to tackle issues and subjects that other programmes would shy away from. An entire episode is devoted to a transsexual inmate whose present-day strife in prison is juxtaposed with flashbacks to her life before, where she struggled to get acceptance from her family. Seemingly hardened criminals are revealed as ordinary people who made shitty decisions and had no choice but to adapt before life broke them. And Captain Janeway from Star Trek: Voyager plays a Russian matriarch who runs the prison kitchen with an iron fist. There’s a lot to love about this show.

More Fun In Prisons: The Trailer For The Oldboy Remake Is Finally Out

Orange Is The New Black mixes laugh-out-loud one-liners with moments of intimacy and poignancy, not to mention deeply uncomfortable oh-God-prison-is-horrible bits. There are multiple flashbacks to flesh out the characters. By the time I got to the end of the 13th episode, I felt like I almost knew them as if they were real people, such is the amount of time that the show invests in them.

This is television that feels daring and different, which makes it a perfect fit for Netflix’s ‘Original Series’ imprint. With no networks or advertisers to placate, the show has creative freedom to do what it pleases, which is why it can have an 18 rating and  fill its episodes with fascinating female characters and a minority of male ones who function mainly as antagonists or generic love interests. It also, finally, gives Netflix must-have status.

A second season is in on its way and all 13 episodes are now up for you to plough through, so roll that zoot, put the kettle on and get your bean bag out because you’re in for one hell of a session. Enjoy.

Also On Netflix: Ren And Stimpy Is The Greatest Cartoon Ever Made