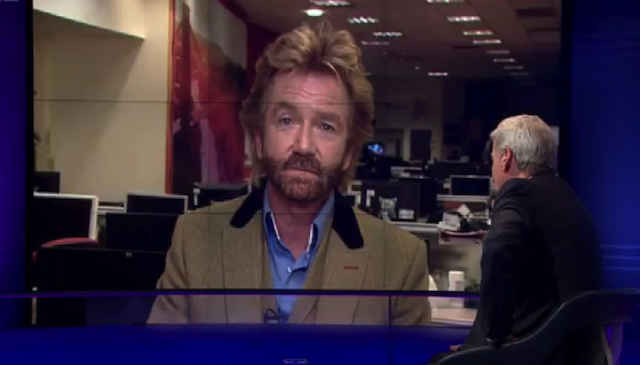 Apparently he’s the head of a group of investors who are aiming to buy the BBC in order to save it from itself.

Noel Edmonds has taken the bizarre step of appearing on Newsnight to announce that he’s the figurehead of a group of ‘big time investors’ known as ‘Project Reith’ who have been meeting in secret for the past 18 months with the intention of buying the BBC and turning it into a private company that will turn a profit whilst still keeping its public service mandate. Guess he wasn’t too happy about the recent decision to axe BBC 3.

Noel went up against Jeremy Paxman last night to explain his intentions and was met with Paxman’s usual sardonic responses. You can watch the exchange between the two below in which – despite the sheer ridiculousness of what he is saying – Edmonds actually manages to come out on top, mainly because he’s met with suitably disparaging comments from Paxman including lines like ‘Who exactly are these other big name investors? With the greatest of respect (lol) are they other afternoon TV show hosts with beards?’ and ‘Is Mr Blobby the man to save the BBC from itself?’

Edmonds’ argument was that the BBC was sleepwalking itself to disaster and was no longer providing the service that it set out to do. He also points to the fact that the BBC has faced a 20% funding squeeze since 2010 and stands to lose a further £200 million thanks to a new law that was recently passed that means you will no longer have to go to jail if you don’t possess a TV licence. Still, even though that does mean it won’t have as much money to spend on ‘quality’ programming like Sun, Sex and Suspicious Parents and Strictly Come Dancing or whatever crap it’s currently showing, it doesn’t really explain why Project Reith is a viable alternative. Or even what the hell Project Reith actually is. 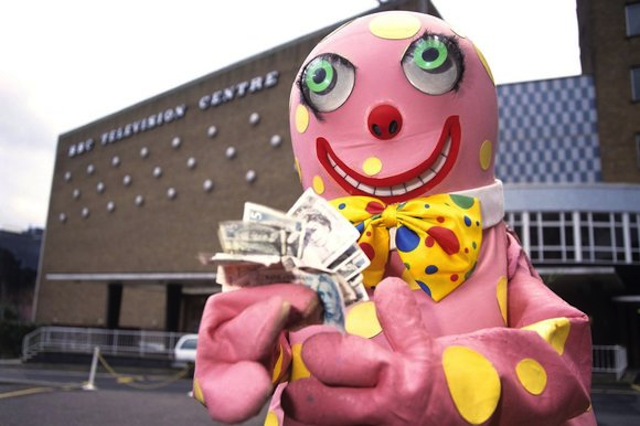 Apparently every ten years, the BBC has to undergo a ‘charter renewal’ and prove that it is still worth funding via the taxpayer/TV licences/however else it gets its money. This requires a lot of paperwork and interaction between various government agencies but in the past 100 years the charter has always been renewed. It comes up for renewal in 2016 and this is when Edmonds and his consortium intend to strike.

Given that the charter has always been renewed it would seem that the chances of success of this consortium are fairly small, so it seems even weirder that Edmonds would appear on national television two years before said year to announce his intentions, but hey I guess Russell Brand is busy doing something so Newsnight needed something to get people talking about it again.

Whether this is serious or just another massive trolling (or perhaps an extended advert for some kind of Ultimate version of Deal Or No Deal?) I don’t know, but it certainly seems like Noel is going to have a lot of work to do to get the nation behind Project Reith. I’m definitely interested to see how it pans out though, and also who these other big name investors could be. They could literally be anyone so I’m not going to make any jokes about it just yet because it’ll probably be funnier when their actual identities are revealed.

Until then, enjoy this interview and if you can figure out what the hell he’s actually trying to do then please do let us know. The last 20 seconds are worth sticking around for, when Noel Edmonds reveals that he doesn’t pay his licence fee because he only watches on catchup, which again is a bizarre way to finish one of the strangest segments ever because I just have no idea what he’s trying to say with it.