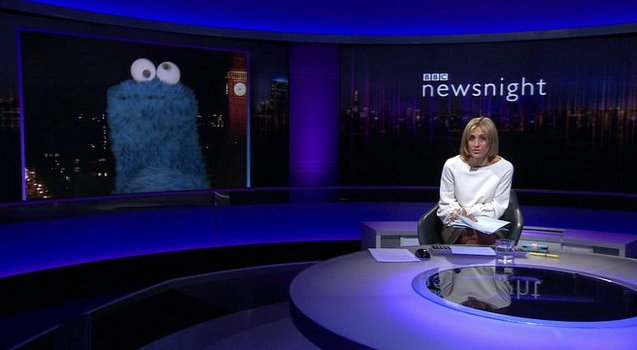 Last night Newsnight had one of their most famous celebrity guests ever – the Cookie Monster – to discuss his move to CBeebies from Sesame Street.

Last night on Newsnight there was a very special guest as the Cookie Monster was interviewed about his and Elmo’s defection from Sesame Street to the BBC, where they will join the CBeebies and feature mainly on the CBBC channel. They’ll be starring in a show called the Furchester where they both help run an ‘almost world class’ hotel. It has 52 parts and will aim to help improve children’s problem solving schools. Or entertain unemployed stoners, whichever you feel is more appropriate for this kind of broadcast.

Obviously this was huge news for the BBC as Newsnight presenter Emilie Maitlis gave the Cookie Monster the last word of last night’s broadcast. If you actually remember what the Cookie Monster acted like or have seen a recent episode of Sesame Street, then you probably know what to expect from this interview, although that doesn’t really make it any less amusing.