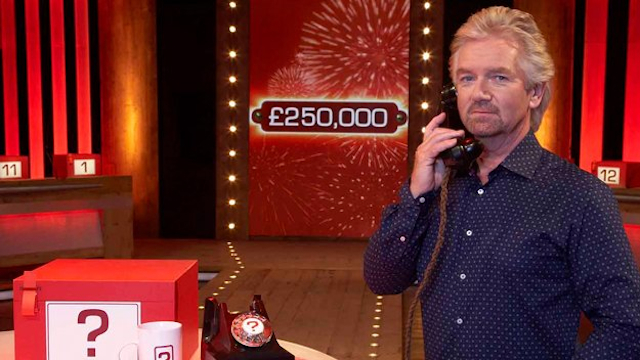 For reasons unbeknownst to the rest of the world, Noel Edmonds thought that he would resume his musical career 20 years after Mr Blobby with a raunchy dance track inspired by Deal Or No Deal. What do you think it’s gonna sound like?

I’m pretty sure this story is going to win weirdest story that we publish today. For reasons unknown to everyone in the world ever, Noel Edmonds has thought it would be a good idea for him to revisit his music career – you know when he somehow managed to get to number one around 20 years ago with a song called Mr Blobby, which was about Mr Blobby.

Following on from that smash hit he’s adopted the same formula, this time turning to his current TV show Deal Or No Deal, which is somehow still being shown daily despite the fact it hasn’t been interesting for about the past seven years. The track has been described as a ‘raunchy dance track’ and features Noel Edmonds using some of his famous lines from the show on a woman – you know ‘I hope it’s a big one’ and ‘Can I ask you the question?”

The results are suitably bizarre, with the video involving a woman (who you kind of expect to be Noel Edmonds by the end of the video because you only see her from behind) dancing on cliffs all over the world shaking her butt, interspersed with some generic crowd shots and generic DJ movements. The whole thing is completely weird. It’s also released under the name Candice Cannes which is apparently the name Noel Edmonds and his wife use when collaborating on dance music tracks. I really hope there aren’t any more of these out there though because this is suitably trashy.

Some people are campaigning for it to be Christmas number one – let’s not let that happen yeah?