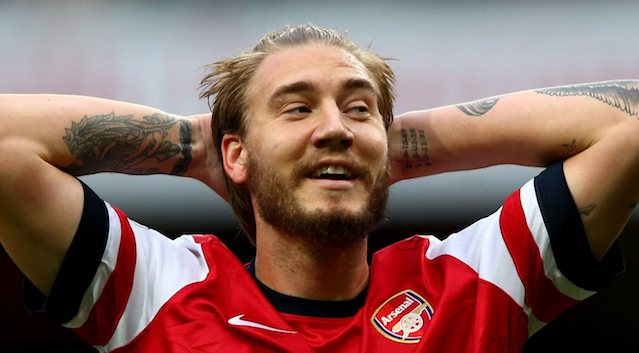 Nicklas Bendtner is in trouble again for his off pitch behaviour.

Nicklas Bendtner is almost as big a joke in the Premier League as Carlton Cole – who we featured yesterday throwing a lameass your mom insult back at some Twitter troll in a cutting display of sarcasm that nobody seemed to really get and everyone seemed to take a bit too seriously – but he has an incredible international goalscoring record which elevates him slightly above the level of ineffective Premier League striker. For most Arsenal fans – and non Danish fans of football in general – he’s a joke.

This can be perfectly illustrated by the fact that he’s now been arrested more times than he’s scored goals this season. This can also be added to his track record of dumb stunts, like when he got filmed not being able to afford a pizza in Copenhagen or pictured with his pants around his ankles coming out of a London club.

This time the offence seems even dumber than both of those too as he wasn’t even in public. Following Arsenal’s win against Southampton on Saturday (which he played absolutely no part in, aside from sitting on the bench) Bendtner went out to get dinner and drinks with his friends and family. Following this, they all decided to go for a late night swim in the pool at the gym in his building, as you do when you’re completely and utterly trashed which Bendtner and his friends probably were because what happens next kinda sounds like something that might happen in an episode of Sun/Snow, Sex and Suspicious Parents.

As they approached the gym – already in their trunks – the fob for the door didn’t work. As they were almost certainly all inebriated they couldn’t figure out why this was happening – it was probably because it was outside pool hours, there was probably a sign clearly stating that too – they instead decided to try and smash the door in to try and get into the pool. Those crazy Danes.

Bendtner was arrested for criminal damage on Monday but was released with a caution. He paid for the damage and the matter is said to be closed, aside from the fact that all football fans will probably remember it for ever and keep laughing at him because of it and all the other dumb things he gets up to in his spare time.

He posted an apology on his Instagram account for the incident which signs off with how he is now focused on tonight’s match. This is all the more funny as chances are he’ll just be sitting on the bench all game again.