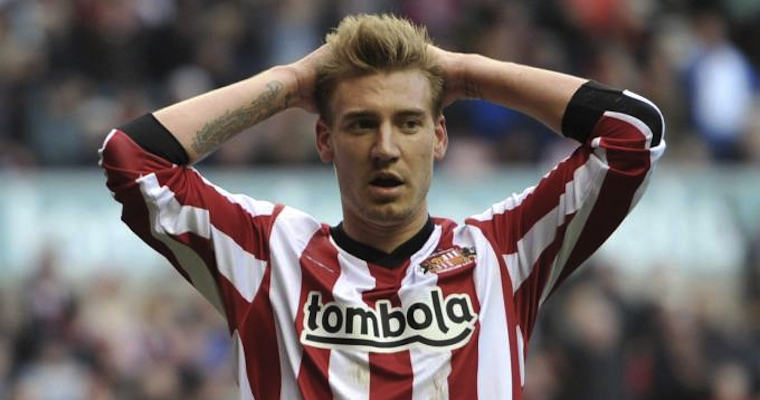 ‘Please man, I just want a meat feast pizza. Don’t you know who I am? I could buy this whole pizzeria!’

I don’t normally like running two football stories in one day but I thought I would make an exception because this is actually really funny. It’s kind of surprising that Nicklas Bendtner hasn’t been mentioned on Sick Chirpse before because he’s clearly an idiot who thinks he’s way better than he actually is, but I guess the thing about Nicklas Bendtner is that he isn’t actually that good at football and the dumb stuff he does off the pitch isn’t anywhere near as entertaining as Mario Balotelli. Although it was really funny when he got thrown out of a nightclub with his trousers down that one time.

This clip emerged today of Nicklas Bendtner drunkenly begging for pizza in a Copenhagen pizzeria. Not sure what he was doing drunk in a Copenhagen pizzeria as you would expect him to be training in Sunderland or whatever (I’m sure Martin O’Neill is going to LOVE Nicklas Bendtner), but I guess that’s beside the point. Apparently Bendtner’s credit card was declined when he was trying to buy a meat feast pizza in the early hours of the weekend after he had been out drinking in Copenhagen.

Bendtner rolled out the infamous phrase ‘Don’t you know who I am!? I could buy the whole pizzeria if I wanted to,’ but the pizza artists held firm and refused to give him a free pizza. Bendtner was then forced to ask other people in the pizzeria for money so that he could scram down on his beloved meat feast pizza. Eventually two girls in the pizzeria fell for his charms and bought him a pizza, but most people in the pizzeria stated that Nicklas Bendtner acted like a fvcking arrogant asshole. Nothing out of character there then huh?

You can see the video below, unfortunately it’s in Danish but it’s still pretty hilarious to watch a drunk and desperate Nicklas Bendtner beg for a pizza, even if you can’t really understand the words.