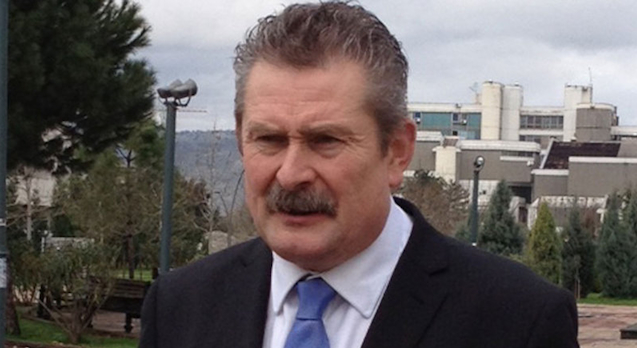 This is why I just love Sky Sports News.

Falling off a ladder is always pretty funny, providing it’s not a really big ladder and you don’t end up breaking all your bones or anything. Although perhaps that’s even funnier, I’m unsure. I guess it depends who it is, huh?

I know that this was definitely utterly hilarious though and I was even luckier in that for some reason I was watching this live on air as it happened, and you know when you’re watching something live and there’s a major screw up it’s way funnier than just watching it on an internet site like Sick Chirpse (sorry guys).

Basically Sky Sports News reporter Nick Collins – you probably don’t know his name but if you’ve ever watched Sky Sports New you’ll know his stupid face and his stupid moustache – was reporting from outside Wembley ahead of the game tonight between England and Scotland. For some reason they couldn’t get a good shot of him in front of the famous ground so they had to set him on a step ladder to do his interview – which was incidentally about Michael Carrick pulling out of the England squad today because of an eye infection – yawn – and for some reason he thought it would be a good idea to just fall off it halfway through the interview while he was live on Sky Sports News. It’s just as hilarious as it sounds, as is Jim White’s reaction back in the studio.

It was even better when they went back to him at Wembley Way – although I can’t seem to find a video of this just yet – and he flat out refused to acknowledge that he had fallen off the ladder and just carried on with the interview like nothing had happened, which just makes him look like an idiot to be honest. I mean it’s not like I – and probably around 100 other people – immediately logged onto their websites to post about it so the clip would be going viral in about an hour or anything, was it? In these situations Nick I think you’ve got to be a bit self deprecating and laugh at yourself – everyone saw it so just have a laugh about it and get on with it.