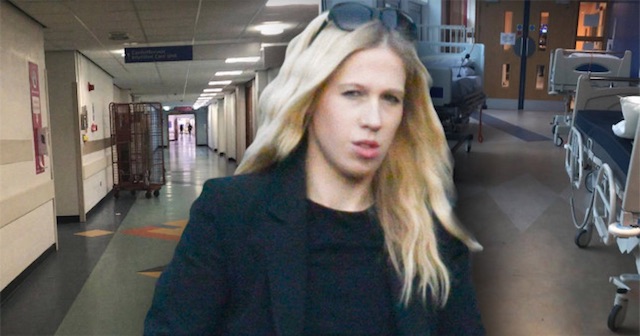 She visited three different hospitals and made videos.

We’ve already had one story about a COVID denier featured today after a man was filmed berating Chris Whitty in the street, and here’s another one about a woman who has been banned from visiting hospitals after she took photographs and videos of the empty wards and posted them on the internet.

30 yearly Hannah Dean repeatedly visited St Richard’s Hospital, Chichester and Southampton General Hospital – both of which are at least 20 miles from her home – in order to photograph the wards and share them on social media. She turned up at Queen Alexandra Hospital, Portsmouth on Monday where she posted footage of the hospital on Facebook saying it was the quietest she had ever seen, despite the fact that 426 patients are currently being treated there for Coronavirus and the ICU is three times the normal size, with 47 patients on ventilation.

Hannah was fined £200 for her actions, but has now been banned from visiting all hospitals unless it’s an emergency, she has a booked appointment or is the dependent of a patient. Here’s what Portsmouth Council leader Gerald Vernon-Jackson said:

It’s an irrefutable fact that there’s huge pressure on the hospital.

To say [coronavirus] doesn’t exist, it’s a hoax, is so demeaning to the work those people are putting in, the risks they’re putting themselves under and the loss so many families have felt in this city.

It’s a disgrace and how anybody could do that to other people and show so little for their suffering and their hard work, I don’t know.

Geez, that video really is painful to watch really isn’t it? Hate it when two dumb people get involved with an argument that neither of them is going to win so just go round in round in circles so one of them can feel that they’ve got the last word in. So annoying.

Anyway, I know that the hospital does look quiet, but it’s not really proving anything when she’s just filming the outside of the hospital and was stopped before she went in is it? I know you can argue that the security guards are blocking her from entering and that adds more suspicion to everything that’s going on in there because it’s so quiet, but you don’t really expect ambulances to be bringing people in every minute of the day do you – everyone is already in the ICU so that’s where you’ll be seeing most of the danger. Seems obvious that this video isn’t really proving anything, but I’m sure a bunch of people out there will disagree with me.

For more of the same, check out this covid denier filming himself licking a cash machine. Not really sure what that’s achieving there.