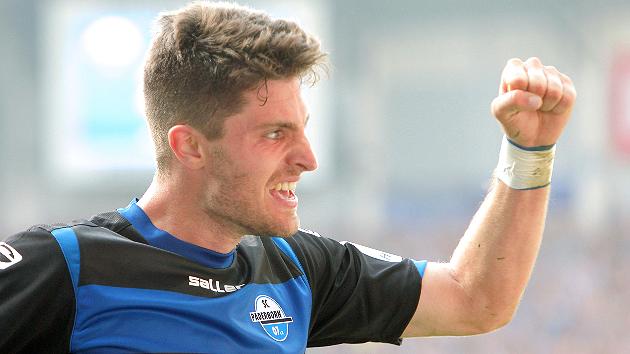 In the last minute of the game this goal meant that Paderborn went top of the table.

You’ve just got to love completely sick goals, haven’t you?

Newly promoted Paderborn were playing Hannover over the weekend in the Bundesliga and the new kids were winning 1-0 with a couple of minutes to go when Hannover got a dangerous looking free kick on the left hand side of the pitch. As is often the case in these situations, Hannover pushed everyone up front – including their goalkeeper – in a desperate bid to force that equaliser that they so desperately craved.

Unfortunately, exactly the opposite happened as they ended up losing the game 2-0 thanks to an absolute peach of a goal from German midfielder Moritz Stoppelkamp. The ball popped out to him on the edge of the area after it hit a whole bunch of bodies once the cross was delivered in, and he cooly chests it down and then volleys it 82 metres into the unguarded Hannover goal. What an absolute killer huh?

To make the story even better though it turns out that this goal actually sent Paderborn top of the league thanks to their goal difference; before it went in they would have been sitting in third. What a start to the season for them, and we can only hope that they manage to stay in the league if they keep producing crackers like this on a regular basis.

Is this goal better than this Fabrizio Miccoli screamer from a couple of years ago though?