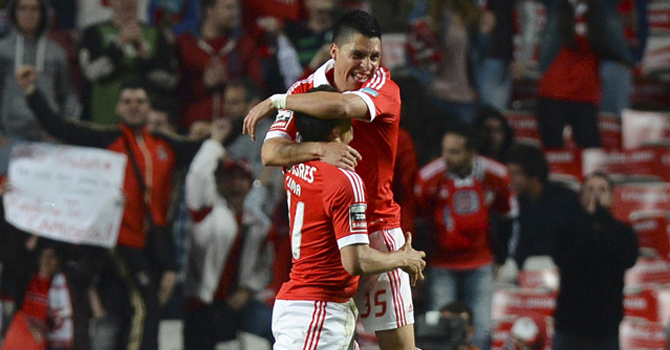 Europa League Semi-Finalists Benfica leave the world of football salavating after they score what can only be described as a sublime team goal. Portuguese tekkers.

The tag of wonder goal gets thrown around a lot these days…be it by your idiot mates trying to convince you that Adebayor hasn’t lost it cos he scored a wonder goal off his ass or some dick on your favourite website directing your attention to a league you couldn’t give a shit about – however – this is different – I swear it.

We’ve all seen Benfica flexing their European muscles over recent years giving Chelsea a scare in the Champs League last season before putting the Toon out on their asses in the Quarters of the Europa this year – however – the second goal they scored on the weekend is something that has got to be marvelled at.

They lost 1-0 in the week away in the lovely Turkey against FenerbahÃ§e but did the business against Sporting a couple of days before courtesy of Eduardo Salvio’s acute finish to open the scoring but it was Lima’s goal to make it 2-0 that will have you salivating.

â˜› Next: Dumbest Own Goal Ever

I won’t spoil it by trying in vain to describe it any better than the crazed Portuguese looney commentating manages but it is a pure one touch team goal extraordinaire and reminds us of what Barca used to do before Bayern Munich cut them down to size.

P.S. If you’re a Chelsea fan, pick your asshole up because this is who you’re gonna have in the Europa League Final.