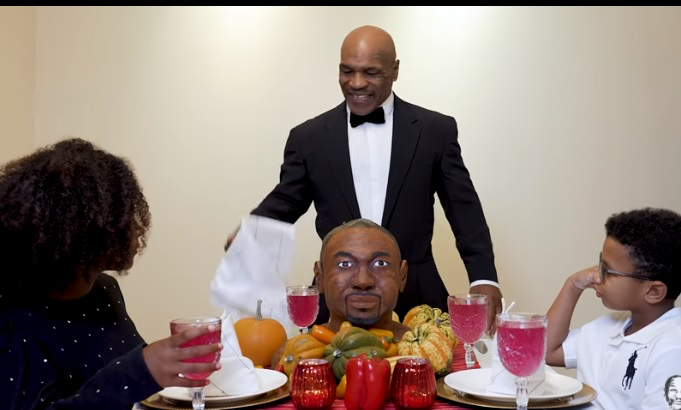 It’s fair to say that everyone was fairly pumped to see Mike Tyson get back into the ring this weekend against Roy Jones Jr after videos of him training and looking like an absolute monster appeared online, but this enthusiasm seems to have died down in the last couple days after we found out that knockouts are forbidden and a winner isn’t even going to be declared. Sounds like a joke to be honest!

Trust Iron Mike to pull out some stunt to get people back interested in it though with this outrageous Thanksgiving sketch where he’s filmed himself cutting off the ear of a Roy Jones Jr cake at his, channelling his infamous incident with Evander Holyfield that left Holyfield without his ear lobe.  I guess it’s kind of funny we can laugh about that now?

You can check it out below:

I also think it’s kinda jokes that anyone is going to actually pay money to watch this stupid fight over the weekend after those rules have been released. I guess it’s helped by the fact that most of the world is on lockdown so won’t have anything to do and might think about forking out for it just for something to do, but even so it’s not gonna be that hard to find an illegal stream or just watch it the day after.

Feel like most people are going to be going with that option. Can’t really see anyone getting that excited about it and wanting to pay for it, but there are a lot of idiots out there so I’m sure I’ll be surprised. Probably get stopped in two rounds after Tyson cuts him or something. They’re not allowed to cut each other either you know.

For more of the same, check out Mike Tyson breaking down in tears and saying he’s scared of his former self. Not surprised to be honest.